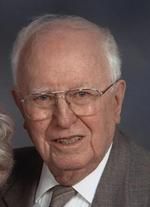 The visitation will be at Zion Lutheran Church in Horicon on Sunday, December 11, 2011 from 1:00 PM until 2:00 PM. The funeral service will follow at the church on Sunday at 2:00 PM with Rev. Mark Hasty officiating. Burial will be at Oakhill Cemetery in Horicon with military honors provided by the Horicon American Legion Post #157.

Alvin Edward Max Benzel was born on December 4, 1916 to Arnold and Ida (Lindert) Benzel in Mayville, Wisconsin. He was a 1936 graduate of Mayville High School. On October 11, 1941 Alvin was united in marriage with Muriel V. Borngraeber at Zion Lutheran Church in Horicon by Rev. Paul A. Feustel. Alvin served in the Air Force during WWII. He worked at the Mayville Shoe Factory, Gardner Mfg. Co., and at John Deere Horicon Works, retiring in 1979. He was a member of the John Deere Spitfire Club and was a past Alderman for the city of Horicon. Alvin was a member of Zion Lutheran Church in Horicon where he also served as a member of the church council.