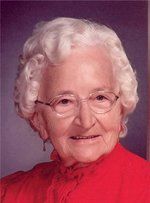 Anna Adeline (Tresch) Eberle, 94, passed from this life into the arms of her Savior Jesus while surrounded by her family on her birthday, April 25th 2008, after a short illness. Anna has called Reno, NV her home since August of 2005.

The daughter of Frank and Maria Tresch, she was born April 25, 1914 in Altdorf, Switzerland and immigrated to the United States in 1927 with her family. She met and married Alois Eberle (also from Switzerland) in 1935. They were cheese makers in the Beaver Dam, WI area for 33 years and celebrated 55 years of marriage. He preceded her in death on Dec 15th, 1990. Anna is also preceded in death by her parents, one sister, four brothers and her eldest son Robert (Dorothy) Eberle of Beaver Dam, WI.

Anna will be remembered for her adventurous spirit (roller coasters at 78, river-rafting at 84, deep-sea fishing in Alaska at 89, and dancing at every age), her wonderful cookies and cakes, her belief that a shot of brandy or skunk oil can cure anything, and her love for her homeland, Switzerland. Anna was a devout Catholic and a member of St. Rose of Lima (Reno, NV), St. Peter”s (Beaver Dam, WI), Catholic Woman, Daughters of Isabella and Christian Mothers. She touched many people”s lives and her spirit lives on in her family and loved ones.