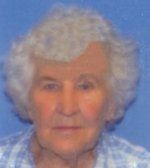 The visitation will be held on Thursday, March 5, 2009 at Murray Funeral Home in Horicon from 4:00 PM until 7:00 PM with Fr. Edward Sippel leading a Vigil at 6:45 PM. There will also be a visitation on Friday, March 6, 2009 at Sacred Heart Catholic Church in Horicon from 10:00 AM until 11:00 AM. The Mass of Christian Burial will follow on Friday at church at 11:00 AM with Fr. Michael Petrie officiating. Burial will be at St. Malachy Cemetery, Horicon, Wisconsin.

The former Anna Shwed was born on July 19, 1924 to John and Anna (Toth) Shwed, in North Fond du Lac. On June 10, 1950, she was united in marriage with Robert R. Reinhardt in South Byron, Wisconsin. Angie”s priority in life was her family. In 1960, her husband was diagnosed with Parkinson”s disease and she spent the rest of their marriage tirelessly and effortlessly taking care of him. Even after he entered into a nursing home, she still went to see him every day, missing only one day in eight years due to a snow storm. Her devotion carried on towards other things in life as well. She had an immaculate garden that she enjoyed to work on, as well as keeping up with the yard work. Angie also had a St. Bernard, Gemini, which was very special to her. She was a member of Sacred Heart Catholic Parish.

The Murray Funeral Home in Horicon is caring for the family. Online condolences may be made at www.MurrayFH.com.