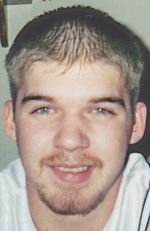 Benjamin was born on October 7, 1978 in Merced, CA. to David H. Kalmus and Jean M. (Bloomer-Kalmus) Cears. Ben was a beautiful happy baby with a head full of blonde hair; he slept a lot, ate good and cried little. As a child Ben was a little on the shy side, he was caring and sensitive, and a good little boy, with a kind heart and sweet smile. He attended school at Saint Paul”s Lutheran school in Brownsville and the Horicon school system.

Ben held various factory positions and he also, bartended for his Grandma at Ma”s bar in Oak Grove for many years, until her death in 2010. Ben was currently unemployed.

On October 30, 2000 Ben and Linda Morales were blessed with a beautiful baby boy, Jaydan Clayton Kenneth Kalmus. Jaydan was the shining light of his Dad”s life and they spent a lot of time together, target shooting with B.B. guns, fishing, playing football and baseball, having “camp fires,” and just hanging out playing games, and watching movies.

Ben was a handsome man with striking blue eyes and a charming smile. He had a caring, giving heart and a beautiful soul. Ben had a good sense of humor and a friendly spirit. He possessed the gift of gab; he could and did talk with just about anybody and everybody. He had a huge soft spot for children; children were drawn to him because of his kind and caring nature. The thought of a child being harmed or abused in any way made him angry and physically ill. He also loved animals, especially, dogs and wolves.

Because of Ben”s love for animals his plans and hopes were to continue his education and become a Veterinarian tech.

Ben leaves behind his eleven year old son, Jaydan, of Beaver Dam, his Mother Jeannie Cears of Juneau, his brother Jacob Kalmus, nephew Jacob Jr., and niece Elizabeth all of Kiel, and his special friend and confidant Arletta Jackson of Beaver Dam. He also leaves behind his Aunts and Uncles, Ken and Vickie (Bloomer) Keller of Knowles, Ronald Bloomer of Juneau, and Dawn Romano-Bloomer of Slinger. Cousin”s Aaron Keller of Green Bay, Anissa Keller and her son Levi Fredrick of Fond Du Lac, and Tyler and Dylan Bloomer of Slinger. He is also survived by his Father David Kalmus of Eden, his half brother Ryan Kalmus, his stepbrother Ryan Cears and many other relatives and friends.

We know that Ben”s eternal wishes for all family and friends would be; do not burden your hearts with sadness but instead remember the good times we shared together. We also know that he would wish for you, a life filled with happiness and love. Our lives have been painfully altered with a silent sadness, the days, hours and minutes will be lonelier, but the endless boundaries of time and space will unite Ben”s loving spirit and our everlasting love forever.

Jeannie, Jaydan, Jacob, Jacob Jr., Elizabeth and family would like to take this opportunity to thank everyone for all their sincere concerns, kind words, thoughts and prayers during this difficult and sad time.

“Perhaps they are not the stars, but rather, openings in heaven where the love of our lost ones pours through and shines down upon us to let us know they are happy.”

There will be a memorial gathering at Murray Funeral Home in Beaver Dam on Friday, January 13, 2012, from 3:00 PM until 5:00 PM. Cremation has taken place.