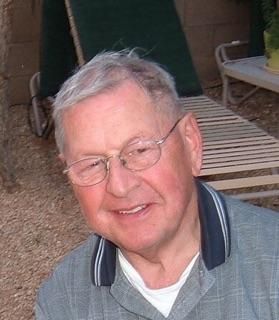 Budford “Bud” Curry, age 92, of Horicon, WI, passed away on Friday, March 31, 2017 at Hartland Place in Hartland, WI.A Mass of Christian Burial will take place on Wednesday, April 5th at 11:00 a.m. at Sacred Heart Parish in Horicon, with the Rev. Father Mike Petrie presiding. A visitation will be held on Tuesday, April 4th at Sacred Heart Parish from 4:00 – 7:00 p.m., and also on Wednesday, April 5th from 10:00 a.m. – 11:00 a.m. at the church. Military Rites will be conducted by the Horicon American Legion Post #157. Inurnment will take place at Oakhill Cemetery in Horicon.Budford Leigh Curry was born on December 22, 1924 to Irving and Emma (Zimmerman) Curry in Lamont, WI. He was united in marriage to Margaret “Magee” Burns on July 8, 1948 at St. Malachy’s Catholic Church in Horicon. He attended Lawrence University in Appleton. Together with his wife Margaret, they owned and operated Curry’s Food Markets in Mayville and Horicon. Bud was a member of Sacred Heart Parish in Horicon. He was veteran of WWII, serving in the Navy. He was a member of the Horicon American Legion Post #157, where he received his 70 year pin. Bud was a member of the Horicon Rotary, where he was a Paul Harris recipient. He was a member of the Horicon Chamber, and served on the Horicon School Board. Bud served on the Board of Directors of Roundy’s, Inc., and also as a director of the Horicon State Bank. Bud is survived by: his children; Lisa (Andrew) Sullivan of Horicon, Ellen (Thomas) Resch of Wauwatosa, Jon Curry of Horicon, Richard (Jill E.) Curry of Horicon, Jill M. Curry of Waukesha, and Jeffery M. Curry of Waukesha; 3 sisters-in-law- Muriel Curry of Madison, Susan Curry of Kaukauna, and Anita Burns of Jefferson; 12 grandchildren- Andrew T. Sullivan, Jr., Brian Sullivan, Jennifer (Greg) Hooker, Jason (Allison) Resch, Catherine (David) Kumm, Nicholas Curry, Monica (Neil) Garrett, April (Jeremiah) Herrera, Valerie (Steven) Christian, Elizabeth (Joseph) Nowak, Joseph (Claire) Curry, Timothy (Katie) Curry; 18 great grandchildren; other relatives and friends.Bud is preceded in death by: his parents, his wife Magee in 2010, his daughter-in law Christa in 2014, and his brothers Robert and Irving.Bud and his wife Magee were great sports fans, supporting the Milwaukee Brewers, Green Bay Packers, Arizona Cardinals, and the Arizona Diamondbacks. They were charter members of Rock River Hills Golf Club of Horicon. Bud and Magee retired to Arizona in 1994, and they returned to Wisconsin in 2010.Memorials may be directed to Sacred Heart Parish in Horicon.