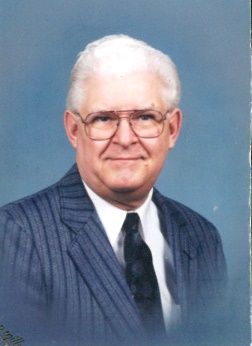 Charles “Jim” Dearing, 87, of Beaver Dam passed away on Wednesday, December 4, 2019 at Sylvan’s Crossing in Beaver Dam. Charles James was born on March 31, 1932 the son of James B. and Carrie Louise (Schroeder) Dearing in Louisville, Kentucky. He was a graduate of Okolona Kentucky High School. He proudly served his country in the United States Air Force during the Korean War from 1951 – 1955, with duty mostly in England. On October 9, 1954, he was united in marriage to Joyce Evelyn Roberts in Cheltenham, England. Jim was employed in data processing and trusts for most of his career, retiring in 1991 from US Bank in Milwaukee. Jim was a very devout Christian man. He was a member of Trinity Church United Methodist in Beaver Dam, where he enjoyed attending bible study. While residing in Milwaukee, he was involved with Gideon International and while living in Indiana he was a member of the Exchange Club. Jim was a member of the Beaver Dam AM Kiwanis International. Jim was very personable, an avid reader and a lifetime stamp collector. Jim is survived by his wife Joyce of Beaver Dam; his daughter Jackie (Kurt) Eggebrecht of Appleton; grandchildren: Kurt (Meranda) Eggebrecht Jr. and their daughters Lucy Grace and Eden Joyce; Kirsten (Daniel) Scharneck, Daniel Huff, and Jarrod (Heather) Huff and their daughters Jailyn and Jaclyn and his son-in-law Greg Huff of Indiana. He was preceded in death by his parents James and Louise Dearing and his daughter Sharon Marie Huff. A memorial service for Jim will be held on Thursday, December 12, 2019 at 11:00 a.m. at Trinity Church United Methodist in Beaver Dam with the Rev. Cherie Forret officiating. A visitation will be held prior from 9:30 a.m. until the time of service at 11:00 a.m. also at the church. Inurnment will be at the Cemetery of the Pines in the town of Boulder Junction at a later date. Memorials in Jim’s name may be made to Trinity Church United Methodist or to Generations Homecare and Hospice. The family would like to extend a heartfelt thank you to the staff of Sylvan’s Crossing and Generations Homecare and Hospice for their wonderful and thoughtful care and compassion. The Koepsell-Murray Funeral Home in Beaver Dam is serving the family. Online condolences may be made at www.koepsellfh.com