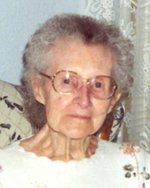 Clara”s cremated remains will be scattered at Oakwood Memorial Park in Chatsworth, California, at a later date. There will be no formal services.

Clara Mae Chalder was born on July 11, 1910 in Dubuque, Iowa to the late John Albert and Lena (Wendt) Chalder. On January 11, 1936, she was untied in marriage with Neal C. Wilmot. In June of 1948, she resided in Simi Valley, CA, where she lived for 40 years. Clara and Neal were involved in several bowling leagues, winning many trophies. In her earlier years, she enjoyed crocheting and knotting. Clara liked to do gardening, reading and being with her many friends and relatives.

Clara was preceded in death by her parents, her husband of 63 years, one sister and four brothers, and a son, Neal C. Wilmot Jr. She is survived by her children, Dolores Sherman, Beaver Dam, Myrl Davis, Beaver Dam and Joan Shackelford, Hayden Lake, ID, 19 grandchildren, several great grandchildren, and many great-great grandchildren. She will be greatly missed by her family and friends.

The family suggests that memorials be made in Clara”s name to the American Cancer Society.