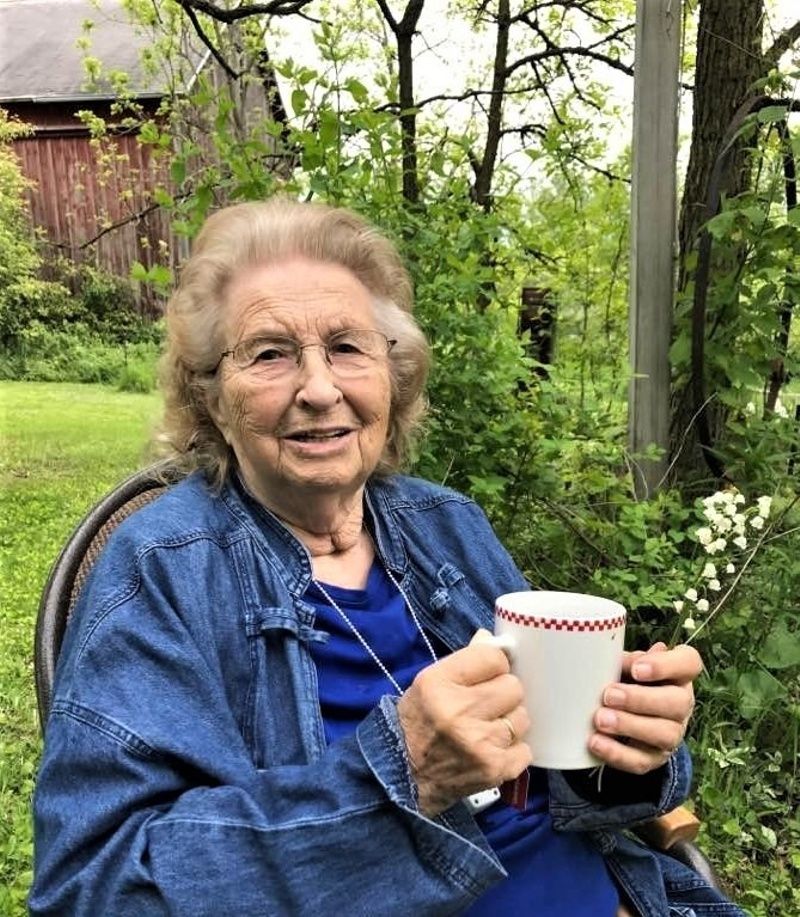 DeLoris (Dee) Madelyn Schwantes VanderVelde died of Covid at age 100 years, 11 months Friday, December 18, 2020. She was born to Arthur and Alma (Rohde) Schwantes at Rushy Glen farm in Juneau, Wisconsin on January 25, 1920 during a blizzard. Dee always prized education. At age four, Dee convinced her parents and ultimately the school board, to allow her to attend school early, along with her older sister at the nearby one-room school, Riverview School. Dee eventually became the teacher there at age 17. She was the first in her family to graduate from high school, riding her bicycle along country roads the five miles to Horicon High School. She then attained her teacher’s license from Dodge County Normal and UW-Oshkosh. She eventually earned a master’s degree (UW-Madison) in reading. All in all, Dee taught in Wisconsin schools for almost 50 years — in Dodge County, Monona, Madison, and McFarland. She found innovative ways to reach struggling and reluctant students. She made friends and visited teachers in Wales. In her 60’s, Dee became the reading and GED instructor at Taycheetah and Fox Lake Correctional Institutions. At 17, Dee met her future husband, Harry VanderVelde. They were engaged before he enlisted in the army in WWII. While Harry was stationed in the Pacific, Dee taught school and they corresponded daily for years. After the war, they married and settled in Monona where they worked hard and raised two daughters. Dee always dedicated herself toward improving communities and institutions where she lived. In the 1950’s, Dee co-founded one of the first nursery schools in the Madison area, the Monona Grove Nursery School, which still serves children today. She saved trees along Monona Drive and preserved land from unnecessary development. She was a founding member of Lake Edge United Church of Christ in Madison. In the 1970’s, she opposed the Vietnam War and in the 2010s protested changes that would harm Wisconsin’s education system. In the 1980’s she served as a senior intern for Democratic Congressman Robert Kastenmeyer, living in Washington, D.C. As a reading teacher at Taycheeda, she initiated a program that allowed inmates to qualify for drivers’ licenses, so they would gain that skill on their parole. Even in retirement, Dee continued to develop a reading pedogogy and materials with the intention of reaching developing readers at Nichols School. She made sure that she voted in the last election.She travelled widely, exploring the U.S, Europe, New Zealand, and Australia. Dee had a creative side and she loved to dance. She designed and built two homes in Monona. She enjoyed fashioning original holiday decorations for her home, which Harry would help her execute. Every year, she invented Easter Egg hunts with rhyming clues for her children. She enthusiastically designed her flower beds and sought out new varieties of blooming plants. She wrote short stories. Dee was a loyal friend and a devoted mother. She followed closely the lives of each child, grandchild and greatgrandchild and delighted in their development. In later life, she found sustenance from monthly gatherings with Lake Edge friends to study the teachings of Jesus.Dee is preceded in death by her husband of 55 years, Harry; granddaughter, Sarah Helena Ledolter; and sister, Pearl Vellema. Dee is survived by her daughters, Lea VanderVelde (Johannes Ledolter) and Lori VanderVelde (Geoffrey Herbon); her grandsons, Keenan Herbon (Goldy), Will Herbon (Allison Kirby), Thomas Ledolter and Jeffrey Ledolter; and her great-grandchildren, Jack Herbon, Bodhi Herbon and Ryo Herbon as well as several close relatives. She will be buried beside her husband in a private family ceremony. In lieu of flowers, please consider planting a tree or donating to the Nature Conservancy or to Monona Grove Nursery School, 4200 Buckeye Road, Madison, Wisconsin 53716.