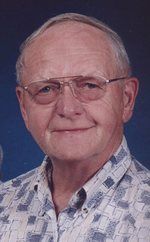 Visitation for Donald will be at the Koepsell-Murray Funeral Home, 131 East Maple Avenue in Beaver Dam, on Wednesday, February 12, 2014 from 4:00 PM to 7:00 PM. On Thursday, February 13, 2014, friends and family will gather at St. Katharine Drexel Catholic Church, 511 S. Spring Street in Beaver Dam from 10:00 AM to 10:50 AM; a Mass of Christian Burial will follow at church on Thursday beginning at 11:00 AM. Fr. Michael J. Erwin will officiate. Burial will be at St. Peter”s Cemetery in Beaver Dam.

Donald F. White was born on October 13, 1929 in Waterloo, Wisconsin to the late Fletcher and Loretta (Setz) White. He graduated from Waterloo High School in 1947. On June 25, 1949, Donald was united in marriage with Catherine T. Kohl in Waterloo. Don worked in the commercial construction trade throughout his life; he owned and operated White Construction, before selling to Luken Lumber, and he worked for 22 years at Westra Construction until he retired in 1992. In retirement, Don enjoyed landscaping and doing yard work with his wife. He was a wonderful father and husband and was one of those men that could fix anything. He enjoyed hunting with his sons and grandsons and he and Catherine enjoyed having the family to their house for holiday dinners and other special occasions. Don also enjoyed following his children”s sporting and school activities, as well as his sons” business endeavors later in life. Donald was a member of St. Katharine Drexel Catholic Parish in Beaver Dam and served on numerous committees and boards, including the Buildings and Grounds Committee. He and his wife also volunteered for Meals On Wheels.

The family would like to extend their gratitude to the staff at Golden Living center for the wonderful care they provided to Donald while he was there; he was well-liked by the staff for his sense of humor and his vibrant personality.

The Koepsell-Murray Funeral Home, 131 East Maple Avenue in Beaver Dam, is caring for the family. To leave condolences, for directions, or for other information, please visit our website at www.MurrayFH.com.