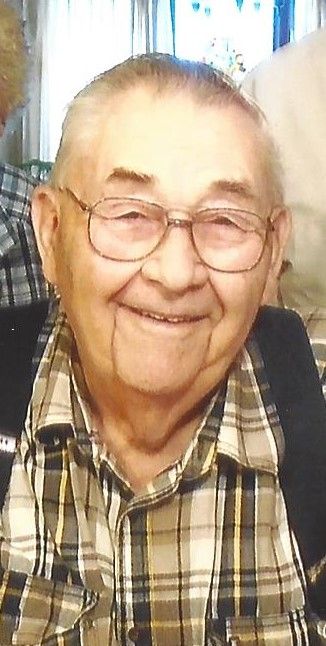 Earl Donald Lichtenberg, 84, of rural Mayville went to join his Lord on Dec. 10, 2018 from complications with congested heart failure. Earl was born April 11, 1934 to the late Edgar and Irma (Gentz) Lichtenberg in the same house he currently lived in and passed away in with his loving family by his side. Earl married Mona Miescke on September 27, 1958 at Zion Lutheran Church in Horicon. Earl was baptized and confirmed at Immanuel Lutheran Church (River Church) Mayville, and has been a lifelong member; where he proudly held elected positions for the school and church. Earl’s love for trucks started young when hauling milk by cans at age 16 to Purity cheese in Mayville. He grew that into the business of Lichtenberg Bros. to his final days, along with the selling of Christmas Trees. Modified racing at local racetracks was enhanced by 40 years of attending Indy time trials with the “Mayville Hot Rods” and was his time to enjoy his passion of auto racing. Earl served his country in the U.S. Army from 1956-1958 and was stationed in Germany. Earl had a huge heart and would help anyone in their time of need. He truly treasured the time he spent with his grandchildren and great grandchildren. Survivors include his wife of 60 years, Mona; children: Dale Lichtenberg of Mayville, and Diane (Daniel) Krueger of Mayville; five grandchildren: Heidi Lichtenberg, Jerome (Jade Gross) Krueger, Mark (Kayla) Lichtenberg, James Krueger, and Olivia (Joel) Voisin; four great grandchildren: Ariana, Oliver, Xavier and Camilla; his brother Roy (Sandy) Lichtenberg, and sisters: Joyce (David) Bruni, Jean Lichtenberg, and Judy Nass; brothers-in-law: Robert Miescke, and David (Cheri) Miescke and sisters-in-law Cecelia Immerfall and Lori Miescke. He is further survived by nieces, nephews, other relatives and friends. He is preceded in death by his parents, parents-in-law, his brother Roger Lichtenberg, daughter-in-law Sandy Lichtenberg; brothers-in-law Donald Miescke and Edward Miescke and sisters-in-law Sharon Miescke and Jeanez Miescke. Family and friends may visit with the family at the Koepsell Funeral Home in Mayville on Thursday, Dec 13th from 4:00 p.m. until 7:00 p.m. Visitation will also be at Immanuel Lutheran Church (River Church) Town of Theresa on Friday, December 14th from 11:00 a.m. until time of service at 1:00 p.m. The Rev. Douglas Zahner will officiate. Burial will follow at Immanuel Lutheran Cemetery in the Town of Theresa. Graveside military honors will be conducted by the by the Theresa American Legion Post 270.Memorial donations in Earl’s name may be made to Immanuel Lutheran Church. The family wishes to extend a heartfelt thank you to the staff of St. Joseph Hospital in West Bend, Hope Nursing Home in Lomira and the Compasses Hospice Care for their wonderful and compassionate care of Earl.The Koepsell Funeral Home in Mayville is serving the family. Online condolences may be made at www.koepsellfh.com.