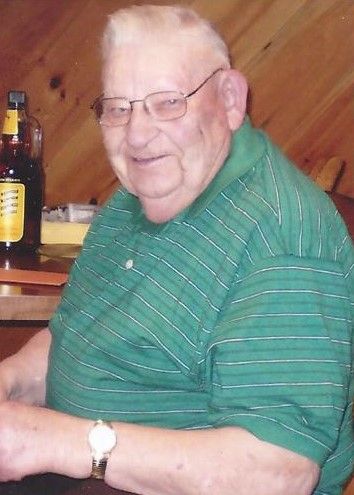 Eldred W. ‘Buddy’ Pagel, 89, of Horicon passed away at Marvin’s Manor in Horicon on Thursday, October 19, 2017.Memorial Services will be held on Wednesday, October 25 at 11:30 a.m. at St. Stephen Ev. Lutheran Church in Horicon with Rev. Daniel Seehafer officiating. Visitation will be held from 9:30 a.m. until the time of service at the church. Burial will take place at Oak Hill Cemetery in Horicon. A luncheon will be served after the inurnment at St Stephen’s Ev. Lutheran Church in Horicon.Eldred was born the son of Walter and Hattie (Mattes) Pagel on June 25, 1928 in the town of Oak Grove. He was united in marriage to Charlotte Heid on August 5, 1978 at St. Malachy Catholic Church in Horicon. Buddy farmed in the town of Oak Grove and then worked for the city of Horicon until retirement in 1988. He was a former member of the Kiwanis and the Horicon Lions Club. He was a lifelong member of St. Stephen Ev. Lutheran Church in Horicon. Buddy is survived by his wife of 39 years-Charlotte of Horicon. His brother in law- Ronald Heid of Watertown. He is further survived by nieces, great nephews and great great nephews.He is preceded in death by his parents, sister Deloris (Albert) Senneff and a brother in infancy.The family wishes to send special thanks to Marvin’s Manor for their care shown to Buddy over the years as well as Generation Hospice. Memorials may be made to St Stephen’s Church, Horicon Area Foundation, or the charity of one’s choice.