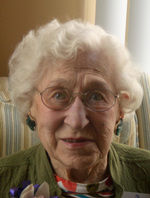 Evelyn “Evie” Kathryn Hankes, 92, formerly of Beaver Dam, died on April 27, 2011 in Idaho Falls, ID, with her daughter Mary Alice at her side. Evie moved to Idaho Falls in 2008 after hip replacement surgery forced the energetic 89 year old to leave her lifelong Beaver Dam residence.

Evie was born on December 4, 1918 to Frank and Amelia ((Mimi) Evans. She had an older brother Frank and
a younger brother Bob, both men defending our country in separate branches of the military during WW 2. After high school, Evie held a secretarial position at the Dodge County Court House in Juneau. During the war, Evie also volunteered at the hospital, lending aid to war veterans. Evie was a spirited young lady and when the big bands would play at the Legion Building, she would sneak out the window to jitter bug the night away. Eventually, she met an “incredibly tall, dark and handsome guy” who was a bronze star recipient in Italy during WW 2. She and Clem Hankes married in July, 1945. While Clem managed a Sherwin Williams paint store, Evie took pride in raising their three children and keeping a meticulous home. She was an expert seamstress and passionate about fashion! She also played a very aggressive game of volleyball, loved bridge, and bowled. She walked miles every day until the broken hip put an end to her independence and mobility, forcing the move to Idaho. Above all, she was a hard working wife and supportive mom.

Evie was preceded in death by her parents, brothers Frank and Bob Evans, and husband Clem in 1983. She will be desperately missed by her children Mary Alice (Richard) Thom, Idaho Falls, ID, Bill (Diane) Hankes of Trabuco Canyon, CA, and Trish (Blaine) Schubarth of Colorado Springs, CO, as well as her six grandchildren, Travis and Dusty Thom, Hilary (Brody) Dittemore, Ryan and Kyle Hankes, Jacob Towne, and a great grand baby Rosabella Zunk.

Since February, three parents of our close-knit neighborhood on Mackie Street have passed on. We take comfort knowing they are watching over us, celebrating their reunion in a much better place. You can almost smell the bullheads frying and the home brew at their block party above.

A memorial gathering will be at Murray Funeral Home in Beaver Dam on Thursday, July 28, 2011 from 2:30 PM until 3:30 PM. The memorial service will follow at the funeral home on Thursday at 3:30 PM with Fr. Michael J. Erwin officiating. Inurnment will be at St. Peter”s Cemetery, town of Beaver Dam, Dodge County, Wisconsin.

The Murray Funeral Home, 131 E. Maple Avenue, Beaver Dam is caring for the family. To leave condolences, for directions, or for other information, please visit our website at www.MurrayFH.com.