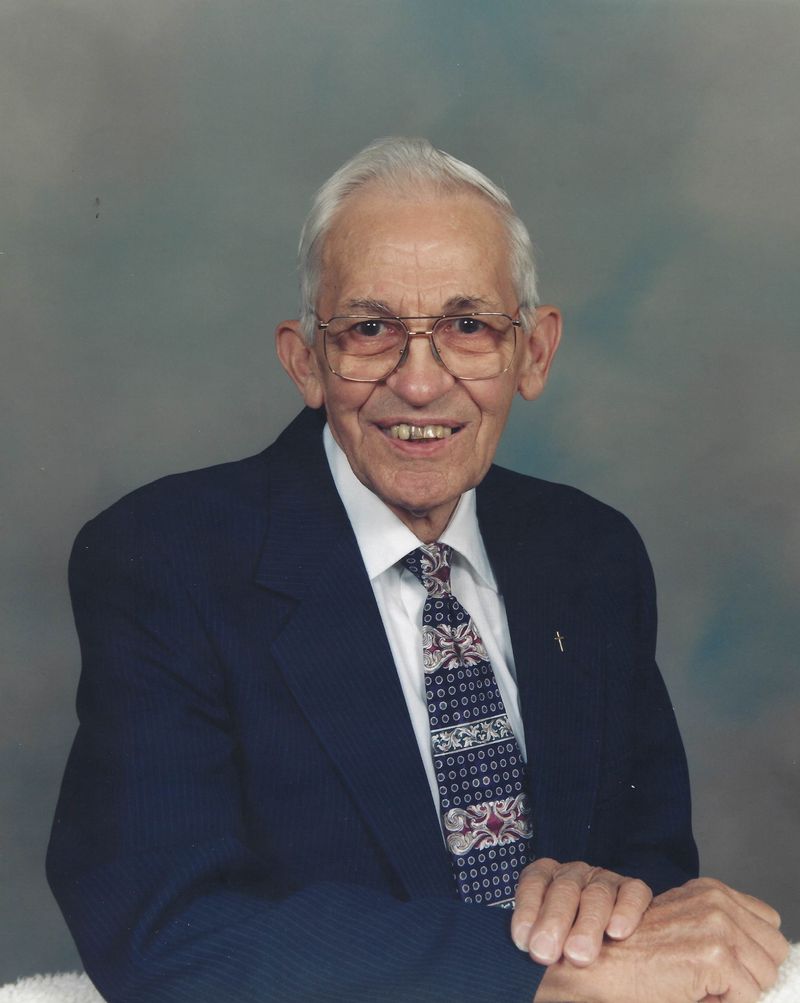 Francis August Schraufnagel, age 99, of Brownsville passed away February 7, 2019 at Hope Health & Rehabilitation Center, LomiraFrancis was born June 1, 1919 in Fond du Lac, the son of Joseph A. and Theresa (Feucht) Schraufnagel of LeRoy.Francis married “the love of his life” Helen Elenore Lehmann at St. Andrew’s Catholic Church, LeRoy on November 25, 1942 Francis worked for the Mayville Co-op in the early “40’s” then dairy farmed for many years and later in life worked at Mayville Metal Products until his retirement.Francis’ passion was his wildlife oil paintings but also worked with charcoal and black on white scratch drawings as well. In his early 90’s Francis painted old steam engine trains with valley and mountain background scenery. Francis hung up his paint brush in his early 90’s but did continue to dabble with scratch drawings. Francis along with his wife Helen were members of St. Andrew’s Catholic Church choir and sang in it for many years Francis retiring from it in his early 90’s. Francis is survived by his seven children, Steven (Diane) Schraufnagel of Fond du Lac, Juliann Bashaw (friend Darrell Gundelach) of Fond du Lac, Elizabeth “Eli” Miritz of Fond du Lac, Leslie (Mary) Schraufnagel of Fox Lake, Anne (Glenn) Loest of Kansas, City, MO., Mary Clark of Brownsville, and Patricia(Dan) Wiesner of Neenah. 15 grandchildren, 23 great grandchildren & 1 great-great grandchild. Francis is also survived by his sister Martha Cisler of Greenfield and sister-in-law Marie Schraufnagel of LeRoy. Further survived by nieces, nephews, other relatives and many friends. Francis was preceded in death by his wife Helen on August 19th, 1990, also preceding Francis were his brothers Alfred, Norbert, Hubert, Leonard & Carl and sisters Loretta, Sister Philomene, and Alice, two sons-in-law Larry Clark & Terry Bashaw, one great grandchild Bryant Summers, fifteen sisters-in-law & nine brothers-in-law A Mass of Christian Burial will be held on Monday February 11, 2019 at 11 a.m. at St. Andrew’s Catholic Church in LeRoy with the Rev. Fr. Tom Biersack presiding. Visitation will be held on Monday from 9:30 a.m. until the time of Mass at 11 a.m. Burial will take place at St. Andrew Cemetery in LeRoy. The family of Francis would like to Thank the Staff at Hope Health & Rehabilitation Center, Lomira, Agnesian Health Care Hospice for all the care Francis received over the past few years. We would also like to thank Dan Feucht for his many visits, stories and jokes he had for Dad during that time. Memorials for Francis can be directed to St. Andrew’s Church, Hope Health and Rehabilitation in Lomira, or the American Cancer Society