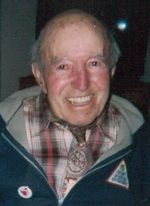 A funeral service will be held at 11 a.m. on Thursday, June 19, 2014 at the Koepsell-Murray Funeral Home, N7199 N. Crystal Lake Rd., Beaver Dam with the Rev. Terry Larson officiating. A visitation will also be held on Thursday from 10 a.m. until 11 a.m. at the funeral home. Interment will take place at Oakwood Cemetery in Beaver Dam.

Gilbert was born on January 31, 1921 in the town of Beaver Dam to Oscar H. and Cora M. Koch. He grew up on the family farm, Midway Stock Farm, which he later would become the proud owner. In high school he belonged to the Future Farmers of America and farming would always remain his passion in life. He had a large dairy herd for many years and was still on the tractor at 90 years of age.

He enjoyed showing family and friends around the farm and explaining how things were done in the “old times”. He attended many a car show with his 1948 International truck and was a regular at the Antique Power Show in Burnett. You might also have seen him at the Farmers Market selling produce from his huge garden and visiting with his customers. Always a fan of the Don Peachey Band, he often could be seen at various parks listening to them play during the summer. Another highlight of each year was attending the Dodge County Fair for the polka music, farm talk, demo derby and cream puffs. It seemed he was always in a good mood and a smile on his face.

He was preceded in death by his parents, his sisters Evelyn Koch, Dorine Koch, and Carol Kellom, a brother-in-law Glenn Kellom, his nephew Tom Kellom and niece Mary Beth Kellom, a great-niece Sarah and other relatives.

Memorials may be directed to First Ev. Lutheran Church in Beaver Dam.

The family extends a special thank you to the compassionate caregivers at Golden Living Center Beaver Dam and Heartland Hospice.

Koepsell-Murray Funeral and Cremation Services, N7199 N. Crystal Lake Rd., Beaver Dam is serving the family. Online condolences may be made at www.koepsellfh.com.