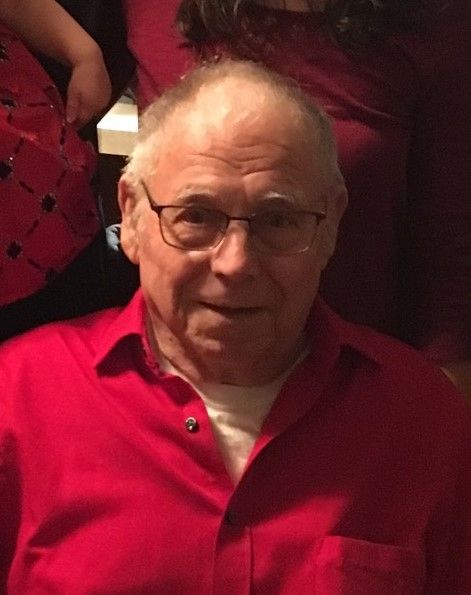 Gordon V. Del Ponte, age 83, of Knowles passed away on Wednesday, March 6, 2019 at St. Agnes Hospital in Fond du Lac with his family by his side.A Mass of Christian Burial will take place on Tuesday, March 12 at 6 p.m. at St. Andrew Catholic Church in LeRoy with the Rev. Fr. Tom Biersack presiding. A visitation will take place from 3-6 p.m. on Tuesday, March 12 at the church in LeRoy. Private burial will take place at St. Andrew Cemetery in LeRoy.Gordon Vernon Del Ponte was born in Brownsville on November 14, 1935 to Battiste ‘Teiste’ and Wilhelmina ‘Billie’ (Weber) Del Ponte. He was united in marriage to Patricia ‘Pat’ (Clark) on September 5, 1959 at St. Andrew Catholic Church in LeRoy. Gordon proudly served in the US Army, stationed in Fort Bliss, TX. He worked at Western Lime and Cement in Nasbro. He also worked at Michels Corp. Breit Construction, and Waas Boring and Cable in Knowles. He was a 40 year member of the Knowles Fire Department, serving as Assistant Chief for many years. After retiring from Waas, he found he needed to keep busy and was one of the ‘Grey Eagles’ at Quad Graphics part time. Gordon was very talented at working with wood, fixing broken items (not always his favorite thing to do, but got it done). Every grandchild has a step stool that he made. He also donated many log cabin bird feeders to local fire department fundraisers and to the Mayville Gun Club fundraisers. He spent many hours in his garage picking out hickory nuts to the delight of family and friends who were recipients of these gifts. He enjoyed cutting wood and cooking maple syrup with Nitro and Donna Neitzel, gaming trips to casinos, and in earlier years going snowmobiling and driving around in his ’28 Ford on Sundays with family and friends.Gordon is survived by his loving wife of 59 years- Pat. He was a proud dad to three wonderful children- Deb (Bob) Simon of South Byron, Tony (Sharon) Del Ponte of Knowles, and Angie (Darren) Muche of Mayville. It was often said he had ‘seven wonders of the world’- his grandchildren- Ben (Amanda) Simon of Milwaukee, Katie (Mark) Feinstein of Sunnyvale, CA., Adam (Rebecca) Simon of Clarksville, TN., Andy (Kelsey) Del Ponte of Mukwonago, Jamie (Josh) Schraufnagel of Knowles, Amanda (Joe) Haas of Mayville, and Keshia (Wes) Munson of Fond du Lac. 12 great grandchildren- Sophia, Clara, and Max Simon, David and Jason Feinstein, Makenzie and Jackson Simon, Landon, Harper, and Payton Haas, Barrett Munson, Melanie Schraufnagel and one more Simon on the way. He is further survived by his sisters Marcia Milewski of Steele, ND., and Diane (Roger) Zangl of LeRoy. He is further survived by nieces, nephews, other relatives and friends.Gordon was preceded in death by his parents, step mother Agnes, and brothers in law John Milewski and Irvin ‘Pee Wee’ Theis.Special thanks to the staff at the Dialysis Centers in Waupun and Fond du Lac, also the doctors and staff who aided him in his final hours at St Agnes Hospital.