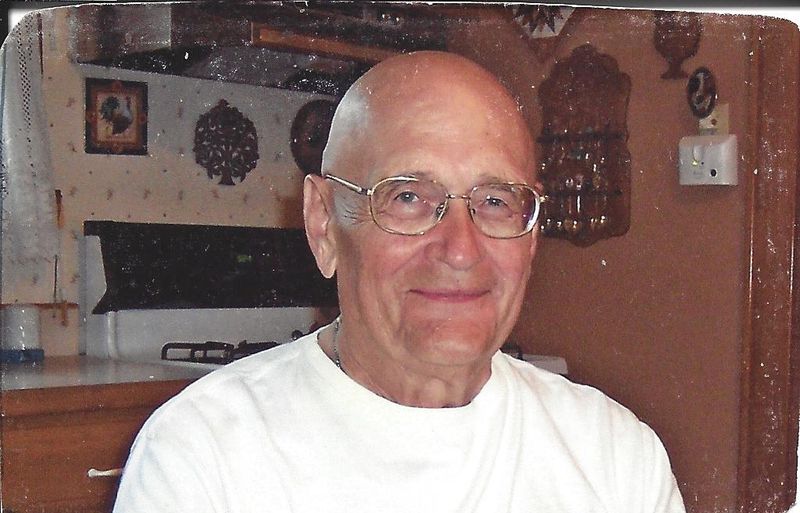 Harry E. Geschke ‘Happy Harry’, age 85, of Horicon, passed away peacefully on Monday, August 11 at Matthews Senior Living of Horicon, with his loving wife Marge at his side.A funeral service will be held on Thursday, August 14 at 5:00 p.m. at Emmanuel United Methodist Church in Horicon with the Rev. Jeff Nicholas officiating. A visitation will take place on Thursday, August 14 at the church from 2:00 – 5:00 p.m. A luncheon will follow at the Horicon American Legion. Burial will take place at Union Cemetery in Theresa.Harry was born on September 3, 1928 to Harry Sr. and Leona (Wendegatz) Geschke in the township of Theresa. Harry was raised in the township of Theresa where he helped on the family farm and continued to farm until 1953. He married Maxine Wendler in 1948 and they had four children; Melvin (Patricia) Geschke, Robert Geschke, Steve (Ann) Geschke, and John (Peggy) Geschke. He then married Rosalin (Steger) Erickson in 1960 and they then had four children- Lucille (William) Bebow, Shirlamay (Dan) Ticks, Melanie (Marvin) Feucht, and Kevin Geschke. On November 27, 2010 he married Marjorie Fish.He worked at Baker Canning Factory from 1953-1959 and then at Maysteel Products from 1959-1991 when he retired. In his spare time he enjoyed spending time with his family and Marge. He liked geo cacheing, building birdhouses, and crafting. He was also a member of the Mayville Senior Center where he first met his devoted wife Marge and a friendship developed into a wonderful companionship. He was baptized and confirmed at St. Peter’s Lutheran Church in Theresa. Later in life he attended Emmanuel United Methodist Church with his wife. He was a very loving, giving, and humorous man who will be greatly missed by his wife, family, many friends, and his cat Ali. Harry is survived by- His wife Marge of Horicon. His children- Melvin (Patricia) Geschke of Lomira, Steve (Ann) Geschke of Lomira, John (Peggy) Geschke of Lomira, Lucille (William) Bebow of Fond du Lac, Shirlamay (Dan) Ticks of Oakfield, Melanie (Marvin) Feucht of Mayville. His step children- Dean Erickson, Brian (Jodi) Fish, Kimberly (Mark) Bunkoske, and Bradly (Kyung) Fish. His grandchildren and great grandchildren. His brother- Gilbert (Elaine) Geschke. Further survived by other relatives and friends. He was preceded in death by his parents, wife Rosalin, sons Robert and Kevin, brothers Waldemar, Raymond, and Charles.Special thanks to Agnesian Hospice Hope for the wonderful care he received especially Larry, Jodie, Gina, Mary, Katie and Kathy.