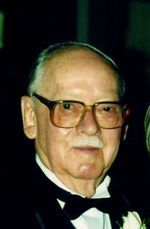 The visitation will be at St. Stephen Ev. Lutheran Church in Horicon on Thursday, January 6, 2011 from 9:00 AM until 11:00 AM. The funeral service will follow at the church on Thursday at 11:00 AM with Rev. Daniel Seehafer officiating. Burial will be at Oakhill Cemetery in Horicon and military honors will be provided by the Horicon American Legion Post #157.

Harvey William Pieper was born on November 27, 1919 in the Township of Herman, Dodge County, Wisconsin to Fred and Martha (Luebke) Pieper. On September 3, 1946 he was united in marriage with Geraldine A. Guenther in Elmwood, Wisconsin. Harvey worked at Gardner Manufacturing for 36 years and part-time as a truck driver for Hanefeld Brothers for 32 years. He was a proud veteran of WWII, serving in the US Army. Harvey was a member of St. Stephen Ev. Lutheran Church in Horicon and a member of the Horicon American Legion Post #157.

Survivors are his children, Sandra Zwygart of Valrico, FL and Russel Pieper of Horicon, two grandchildren, Kira Zwygart and Eric (Christy) Zwygart, three great grandchildren, Caleb Amaden and Stanton and Hudson Zwygart, two brothers, Raymond Pieper of Beaver Dam and Gilbert Pieper of Stoughton, a sister, Verona Krueger of Horicon, nieces, nephews, other relatives and friends. He was preceded in death by his parents, his wife in 1994, brothers, Ervin and Arthur Pieper, and his sisters, Norma Johnson, Evelyn Kiesow and Erna Shepard.