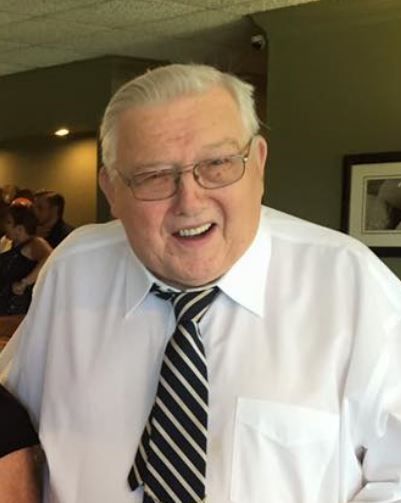 James Emeron Dorst, 88 years old, of Mayville, WI, passed away on Sunday, March 18, 2018 at Beaver Dam Community Hospital in Beaver Dam.A funeral service will be held on Saturday, March 24th at 12:00 noon at St. Paul Ev. Lutheran Church with Rev. Sara Gillespie officiating. A visitation will take place on Saturday, March 24th from 9:00 a.m. – 12:00 noon at St. Paul Church. Burial will take place at Graceland Cemetery in Mayville, with graveside military rites conducted by the Mayville American Legion Post #69.Jim was born to James, Sr. and Emma (Wolff) Dorst on February 27, 1930 in Mayville. He attended Mayville schools and graduated from Mayville High School in 1949. He served his country in the U.S. Army during the Korean Conflict from 1951 to 1953. Jim was united in marriage to Dorothy Ann Gunst on October 7, 1961 at Trinity Ev. Lutheran Church in Huilsburg. Upon discharge, Jim returned to Mayville and was employed at Mayville Metal Products as a Tool and Die Maker for 42 years until his retirement in 1995. He served as a union board officer during his employment.Jim continued a life of volunteer service as an active member of St. Paul Lutheran Church and the American Legion Post 69. At St. Paul, Jim loved to sing in the Senior Choir, lending his voice to countless worship services and many community holiday concerts. He was an active member of the Senior Luther League, and advisor to the Junior Luther League, served on the Church Council, as a Sunday School Teacher, and 11 years as the congregation’s Sunday School Superintendent. Representing St. Paul, Jim was a founding father of Lutheran Teens Athletic Association and served on the LTAA board of directors for over 50 years. Jim volunteered his time to the Bethesda Country Fair for many years, and along with Dorothy, served Meals on Wheels in Mayville. Jim was the local branch president of the Aid Association for Lutherans and later a board member for the East Dodge County district for Thrivent Financial. As a proud veteran, Jim served countless hours to the American Legion activities and events in his 65 years as a member, including the Honor Guard, baseball games, Memorial Day services, bingo games, and the annual picnics. In retirement, Jim enjoyed bowling in the seniors’ league, volunteering at the Mayville Limestone School Museum, and traveling with Dorothy throughout the Midwest on annual mystery tour trips. He was honored in June 2015 to travel to Washington, DC on the Stars and Stripes Honor Flight with fellow veterans. Jim is survived by: his wife Dorothy of Mayville; his sons James W. (Robin) Dorst of Campbellsport and William (Becky) Dorst of Kenosha; his grandchildren Christian (Carrie) Dorst, Anna Dorst, Jacob (special friend Annalise Voyles) Dorst and Andrew Dorst; his brother Harold (Doreen) Dorst of Menomonee Falls; his sister Marion Reuter of Kenosha; his sisters-in-law LaVerne (Kenneth) Schulz of Iron Ridge and Elaine (Claude) Rex of Horicon; his brother-in-law Lloyd Guenther of Elk Mound, WI; nieces, nephews, other relatives and friends.Jim is preceded in death by his parents, his parents-in-law Walter and Adeline Gunst; his sister Gen Guenther; his brother Norman (Mary) Dorst; his brothers-in-law Paul Reuter and Leland Gunst.Memorials may be directed to St. Paul Ev. Lutheran Church in Mayville.Through his life’s journey, Jim made many friendships and touched the lives of those benefited from his volunteer services. His love for his family shone brightest of all, being a loving husband and father, a role model to his children and grandchildren.