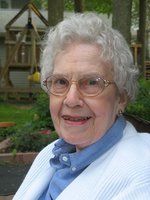 Visitation will be held at St. Katharine Drexel Church, 511 S. Spring Street in Beaver Dam, on Tuesday, July 2, 2013 from 5:00 PM to 6:45 PM. A Mass of Christian Burial will follow at church on Tuesday beginning at 7:00 PM with the Reverend Michael J. Erwin officiating. A military burial will be held at St Peter”s Cemetery on Wednesday, July 3, 2013 at 8:00 AM.

Jean was born on September 26, 1922 to Edward and Gretchen (Kumba) Beers. She attended St Peter”s Catholic School and Beaver Dam Senior High, graduating in 1940. She enlisted as a Wave in the United States Navy during WWII. After basic training she was eventually transferred to Great Lakes where she spent most of her Navy career. Jean received an honorable discharge in May, 1946, having achieved the rank of Yeoman II Class. She was married on May 18, 1946 to Alfred “Louie” Hankes and they became the parents of 8 children: Tom (Janean) of Eau Claire; Jim (Diane) of Keokuk, IA; Paul (Julie) of Madison; Jack (Debbie) of Beaver Dam; Jerry (Donna) of Beaver Dam; Steve (Gini) of Beaver Dam; Barb (Tug) Thomson of Beaver Dam; and Chris(Bill) Champeau of Portage. Jean”s greatest legacy is her eight children who remain devoted to spending time together, sharing life and laughter. Jean was employed by the State of Wisconsin Division of Corrections for 18 years for Probation and Parole, retiring at age 65. After Louie”s death in 1984, Jean married Lester Welch, and later Bill Pirk, both who preceded her in death.

Memorials can be made in Jean”s name to St Katharine Drexel Parish or School.