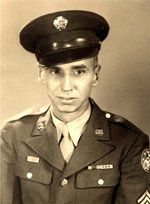 Friends may call at the Elm Lawn Cemetery Chapel in Elmhurst, IL on Wednesday, February 6, 2008 from 1:00 PM until 2:00 PM. A graveside service for John will follow at 2:00 PM at the cemetery. Military honors will also be held.

John Joseph Karczynski was born on November 29, 1908 to the late Joseph and Mary (Spoka) Karczynski, in Chicago, IL. John served in the United States Army from 1942 until 1945 and was stationed in New Guinea. In 1944, he was united in marriage with Ellen Vietzen in Cicero, IL. She preceded him in death. He was employed at International Harvester in Chicago for 40 years, retiring in 1968. In 1969, John was united in marriage with Eleanor Willard in Cicero, IL. They moved to Hayward, WI in 1970 and stayed until 2002. He then moved to Beaver Dam, WI to live with his daughter.

The family suggests that memorials be made in John”s name to Clearview South, 2 West, 198 Home Road, Juneau, WI 53039.

The Pedersen-Ryberg Mortuary in Elmhurst, IL and the Murray Funeral Home in Beaver Dam, WI are serving the family. Online condolences may be made at www.MurrayFH.com.