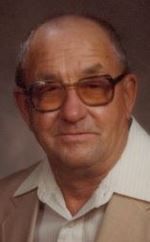 Visitation for John will be at the Koepsell-Murray Funeral Home, N7199 North Crystal Lake Road in Beaver Dam on Wednesday, July 2, 2014 from 10:00 AM to 12:00 Noon. Funeral services will follow at the funeral home on Wednesday beginning at 12:00 Noon. Celebrant John R. Leiting will officiate. Burial will be at St. Michael”s Catholic Cemetery in Beaver Dam.

John was born on October 10, 1918 to the late Frank and Martha (Krezinski) Polchinski. After graduating from Beaver Dam High School, John served in the US Army during World War II, serving with a tank battalion in the Pacific Theater. In November of 1946, John was united in marriage with Clara Westover at St. Michael”s Catholic Church in Beaver Dam. John was a mail carrier in Beaver Dam for over 30 years, retiring in 1979. When he was younger, he enjoyed bowling, baseball and woodworking; he also enjoyed golf and fishing.