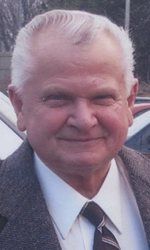 John Thomas Fanshaw was born on November 12, 1936 in Beaver Dam, Wisconsin to the late Russell and Stella (Duehring) Fanshaw. He graduated from Beaver Dam High School. On February 8, 1958, Johnnie was united in marriage with Mary Ellen Scholz; she preceded him in death on December 6, 1969. On September 30, 1972, he was united in marriage with Barbara Stegner. He owned and operated Johnnie”s 66 on the corner of Third St. and N. Center St. since 1958. John appreciated his customers and he always enjoyed the many people who stopped to visit; he will also be remembered for handing out Tootsie Rolls. Through the years, Johnnie had both horses and dogs that he truly enjoyed and cared for, especially his current dog Copper.

Johnnie was preceded in death by his parents; his first wife; two infant sons; two brothers and a sister, Duane Fanshaw, Lydell Fanshaw, and Phyllis Firari.