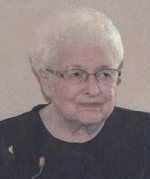 The memorial gathering will be in the chapel of Grace Presbyterian Church in Beaver Dam on Monday, December 30, 2013 from 10:00 AM until 10:50 AM. The memorial service will follow at the church on Monday at 11:00 AM with Rev. Chris Davis officiating.

The former June Teela was born on June 1, 1923 in the Town of Winneconne, Wisconsin to Elmer and Florence (Carow) Teela and grew up on a farm known as Teela Corners. After high school, June attended Oshkosh Teachers College and then went onto Mercy Hospital School of Nursing where she graduated as a registered nurse in 1944. On March 10, 1945, she was united in marriage with Boynton “Bud” Schultz. They were blessed with four children, Phillip, Charlotte, Douglas and Rodney. In 1961, they moved to Beaver Dam where June worked as a nurse for Lutheran Hospital for several years, part time school nurse at Wayland Academy and at Medical Associates until moving to Plainfield, Illinois. In Plainfield June worked as an office nurse for fourteen years until she retired in 1988 after 43 years as a registered nurse. After spending a few years living in Denver, CO, she moved back to Beaver Dam in 1991.

Before being married, June won the title of Whitebass Queen of Winneconne, Wisconsin. While her children were in school, she was on the school board of Gillingham Corners School for two years. June was a member of Grace Presbyterian Church since 1992, where she was a PW Moderator and a Deacon. She also belonged to, and was Chairperson for two years, of the Presbyterian Church Women”s Circle. June volunteered for the Beaver Dam Community Hospital Auxiliary, where she was a board member and worked on the Tree of Lights for many years. She also belonged to and was a board member of the Beaver Dam Women”s Club (GFWC/WGRWC). When June moved back to Beaver Dam in 1991, she got her first cat, Missy. Missy was soon joined by others; Crystal and Gumdrop. These little furry friends gave her much joy and many hours of happiness.

If desired, memorials in June Schultz” name may be made to the Dodge County Humane Society or to Grace Presbyterian Church.