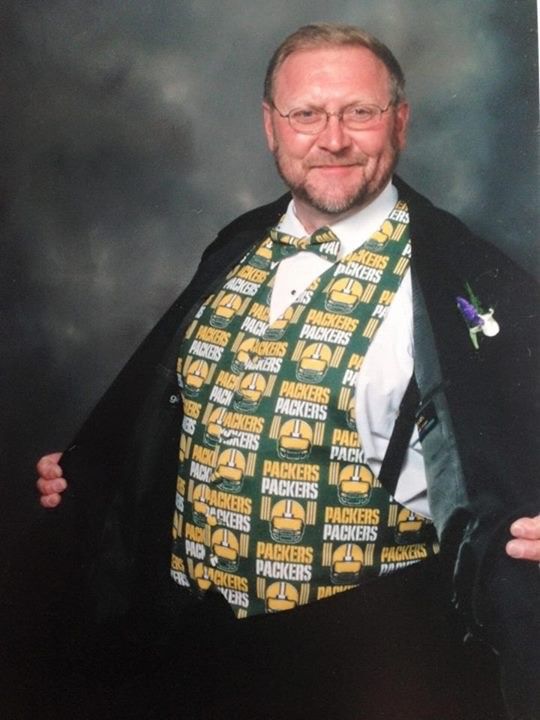 Leon John Schraufnagel, age 65, of Knowles, died from complications related to his courageous battle with cancer. His life on earth ended on November 11, 2015 when God gave the gift of His great mercy and eternal rest. A Memorial Mass of Christian Burial will take place on Saturday, November 14, 2015 at St. Andrew Catholic Church in LeRoy at 1 p.m. with the Rev. Fr. Tom Biersack presiding. A visitation will be held on Saturday, November 14 from 10 a.m. until the time of the service at 1 p.m. Inurnment will be held at St. Luke’s Cemetery in Knowles. Our Dad was a one in a million man who came into this world on September 16, 1950 as the third of seven children born to the late Victor and Florence (Rosebeck) Schraufnagel. He was baptized at St. Andrews Church in LeRoy, WI where he was also a member. As a boy growing up in the late 1950’s and into the 1960’s, he spoke of his childhood with a smile and no regrets. He had fond memories of growing up on the farm and of hunting and fishing. He especially enjoyed sharing stories of his time growing up while sitting under the tree in his front yard, with a beer in hand, surrounded by friends and family.In 1968 Leon graduated from Mayville High School, where he was a member of the football and track teams. As with most boys growing up in the 1960’s, Dad was a huge Green Bay Packer fan and imparted that love of the Packers and football to his boys.On June 5,1971, he married Carol Reible. Together they had 3 children and as a family they enjoyed going to sporting events, taking the occasional trip, playing with their grandchildren, and just being together as a family. Dad earned a living working first at The Knowles Produce and Trading Company in Knowles, WI on two separate occasions as an agriculture mechanic and in the parts department. He worked for Crescent Trucking in Mayville, WI as a diesel mechanic for a short period of time before returning to the Knowles Produce and Trading Company. In 1993 he began working as the Buildings and Grounds Supervisor for the School District of Lomira and retired from the school district in June of 2012.Dad dedicated his life to serving others in local government. In 1979 at the age of 28 he was elected to serve as a town supervisor of the Township of Lomira until 1998 when he became chairperson. He was honored to serve the residents of the township for 36 years. In 2011, he was appointed to serve on the Dodge County Board of Adjustment. Dad was also a member of the Knowles Volunteer Fire Department for a time.Carrying on his legacy are his children; sons Chad (Carolyn) of Oconomowoc, Shawn (Jeanine) of Fond du Lac, grandchildren Sam and Luke of Fond du Lac, Nick (fiancé Becklyn) of Oshkosh; Step-grandchildren Elyse, Christian, Josie Whittaker of Oconomowoc.; sister Vicky (Steve) Vande Zande of Tuscon, Arizona; sister Lois (Dan) Buchta of Mayville; brother Glenn (Tammie) Schraufnagel of Mayville; sister Lynn (Todd) Thiede of Burnett; brother Lyle of Mayville; nieces, nephews, and friends.Preceding him in death were his son Brett -1976; Parents Victor and Florence; brother, Roger; nephew Dane Buchta; Sister-in-Law Joann Radlund of Sun Prairie.Many thanks to Larry Roxbury and the rest of the staff at Agnesian Hospice for the care Dad was given and to all family and friends for their support to us.Good-bye Dad! Until we meet again, may the good Lord hold you in the hollow of His Hand.