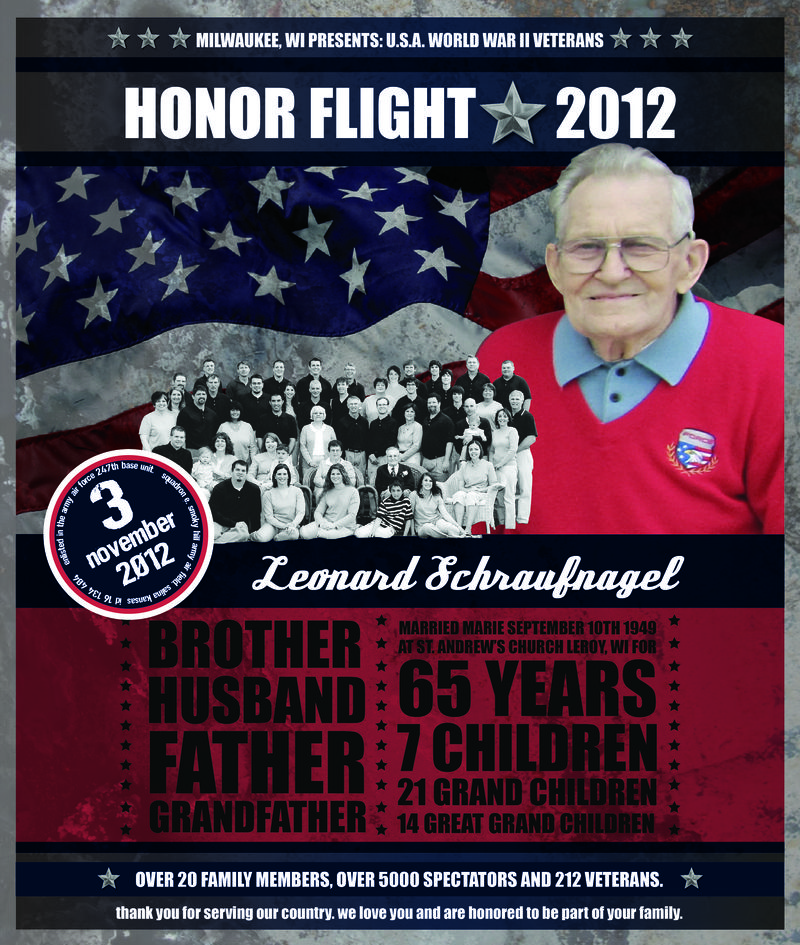 Leonard A. Schraufnagel, 92 of LeRoy, passed away peacefully, on Monday, September 15, 2014 at the Hope and Health Rehabilitation Center in Lomira.A visitation for Leonard will be held at St. Andrew’s Catholic Church in LeRoy on Thursday, September 18, 2014 from 12 pm (noon) until 4 pm. A Mass of Christian Burial will take place at 4:00 pm on Thursday, September 18, 2014 at St. Andrew’s Catholic Church in LeRoy with Rev. Fr. Tom Biersack presiding. Burial will take place at St. Andrew Cemetery with military rights conducted by the Bintzler-Waehler American Legion Post 347.Leonard was born on April 8, 1922 in LeRoy to Joseph and Theresa (Feucht) Schraufnagel. On September 10, 1949 he was united in marriage to Marie Krapfl in LeRoy, Wisconsin. He was employed as a tool and die maker. He enjoyed crafting and inventing as well as bird watching. Most important to Leonard was the time spent with his wife and family. He was a veteran of WWII where he served with the Army Air Corps. He was a member of St. Andrew Catholic Church in LeRoy.He is survived by his wife of 65 years- Marie of LeRoy. His children- Mike (Betty) Schraufnagel of Hillsbough, NJ, Pat (Carol) Schraufnagel of Iron Ridge, John (Linda) Schraufnagel of Campbellsport, Jane (Bernie) O’Connor of Chicago, IL, Jenny (Ron) Youngbeck of Brownsville, Dale (Jackie) Schraufnagel of Ripon, and Warren (Cheryl) Schraufnagel of Lomira. His 21 grandchildren and 14 great grandchildren. He was preceded in death by his parents, 4 brothers and 3 sisters, as well as, 3 sisters in law and 1 brother in law.*Special thanks to Hope Health and Rehabilitation in Lomira for their wonderful care and support.