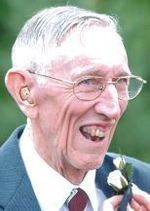 Visitation for Lloyd will be at Good Shepherd Lutheran Church in Beaver Dam on Tuesday, June 3, 2014 from 12:00 Noon to 1:45 PM. Funeral services will follow at church on Tuesday at 2:00 PM with Rev. Collin Vanderhoof officiating. Burial will follow at Highland Memory Gardens in the Town of Trenton, Dodge County, Wisconsin.

Lloyd Elroy Neumann was born on May 12, 1930 in Beaver Dam, Wisconsin to the late Charles and Malinda (Luedtke) Neumann. He was a former member of St. John”s Lutheran Church in the Town of Trenton where he was baptized in 1930, attended parochial school, and was confirmed in 1943. On June 20, 1953, he was united in marriage with Orva E. Roeseler at Immanuel Lutheran Church in Waupun. For his love for his Lord and Savior, he served on the church council for any years and also as an usher and bell ringer. Lloyd was a devoted husband, father, grandfather, and great grandfather. He was a dairy farmer in the Town of Trenton throughout his life until retiring in 1992. In July of 2002, they moved to Beaver Dam. He was a member of Good Sheherd Lutheran Church in Beaver Dam

The family extends a special thanks to Traci and the other staff at Hillside Home Care/Hospice for their support and concern over the past several days.