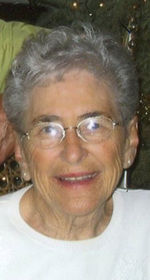 Margaret was born in Horicon, Wisconsin on February 28, 1927, the youngest of three children to Earl and Margaret Burns. Her father died in an auto accident when she was just 20 months old, leaving her mother with three children; Robert, Earl, and Margaret. The young family worked hard to stay together and all were college graduates. Her brothers graduated as Doctors of Optometry and Margaret graduated from Marquette University as a Dental Hygienist. She worked several years for Dr. Helmbrech in Mayville before marrying her husband, Budford “Bud” Curry on July 8, 1948. Together they owned and operated Curry”s Food Markets in Horicon and Mayville, and soon Margaret became a homemaker and mom to six children; Lisa (Andrew) Sullivan, Ellen (Thomas Resch, Jon (Christa) Curry, Richard (Jill E.) Curry, Jill M. Curry, and Jeffery M. Curry.

She and her husband were great sports fans, supporting the Milwaukee Brewers and Green Bay Packers. They were also charter members of Rock River Hills Golf Club. Margaret was an active member of St. Malachy”s Church in Horicon until she and her husband retired to Arizona in 1994. They returned to Wisconsin in 2010.

In lieu of flowers, the family suggests that memorials be made in Margaret M. Curry”s name to Sacred Heart Catholic Church, P.O. Box 27, Horicon, WI 53032.

The Murray Funeral Home, 716 Clinton Street in Horicon, is caring for the family. To leave condolences, for directions, or for other information, please visit our website at www.MurrayFH.com.
.