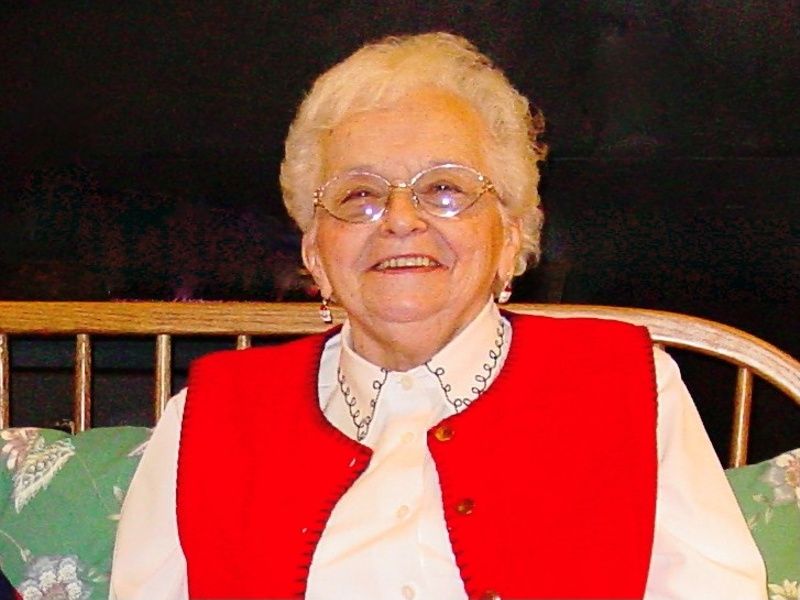 Marge Mountin of Juneau passed away on Thursday February 4 at the age of 102 of natural causes. Marge was born October 19th, 1918 in Juneau, the daughter of Edward and Francis (Kraut) Hilgendorf. A lifelong resident of Juneau, Marge married Maurice Mountin on March 8th, 1941. Marge and Morry were operators of Mountin’s Grocery Store in downtown Juneau, the store they purchased from Joe Ihde in 1957. The store changed hands in 1968, when their son Jerry took over the family business. Marge continued to work for her son in both his Juneau and Mayville stores up until the age of 85, a total of over 50 years in the grocery business.Marge was also at home in the kitchen cooking for family, friends and neighbors. The long list of culinary delights coming from her kitchen included a chocolate birthday cake with custard filling. She also played bridge on a regular basis with her friends. The “girls” played just about everywhere in Dodge County every Tuesday and Wednesday afternoons. Marge was also an avid fan of the Milwaukee Brewers, always asking, “What time is the game on today?” She also watched football from time to time, mostly because she had a bit of a crush on Green Bay quarterback Brett Favre. Marge is survived by two sons Jerry and Tom, (Jerry’s wife Pat), 3 grandchildren, 8 great grandchildren and many nieces, nephews and other relatives and friends. She was preceded in death by her husband Maurice Mountin, brother Elmer Hilgendorf and her sisters Eileen Thomson and Evelyn Hanson.A private memorial service for Marge Mountin will be held at a later date.The Mountin Family would like to thank the staff at Clearview for the wonderful care they provided Marge over the past 8 years.