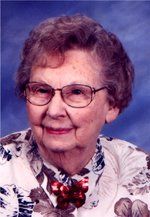 Friends may call on Thursday, February 21, 2008 at St. John”s Lutheran Church in Beaver Dam, Wisconsin from 2:00 PM until 3:00 PM. The funeral service will follow the visitation on Thursday at the church with Rev. Bob Castro officiating. Graveside services will be held on Saturday, February 23, 2008 at Poplar Cemetery in Staples, Minnesota at 11:00 AM with Rev. Neal Malcore officiating.

Marian I. DeWald (McGwin), daughter of Calvin and Mamie Wetherell, was born on August 4, 1909 in Hazel Dell, Minnesota. She was united in marriage with Floyd DeWald on April 30, 1927 in Walker, Minnesota. They made their home in Red Wing, Minnesota, for 40 years. In 1971, Floyd passed away and Marian made her home in Beaver Dam, Wisconsin to be near her daughters.

The family would like to thank the staff at Eagle”s Wings and Clearview Nursing Home for their wonderful care.

The Murray Funeral Home in Beaver Dam is serving the family. Online condolences may be made on our website at www.MurrayFH.com.