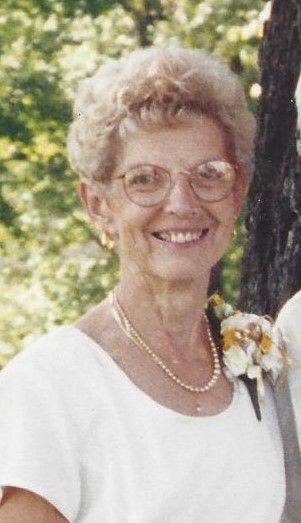 Marion L. Pitzlin, 91, formerly of Horicon passed away at Serenity Villa in Slinger on Sunday October 15th, 2017.Funeral Services will be held on Wednesday October 18th at 12 noon at Koepsell- Murray Funeral Home in Horicon with Rev. Jon Szczesny officiating. Visitation will be held at 11 AM until the time of service at the funeral home. Burial will take place at Oak Hill Cemetery. A luncheon will be served after the interment at St Stephen’s Ev. Lutheran Church in Horicon.Marion was born on February 27, 1926 to Lorenz and Leona (Siedschlag) Daehn in the town of Empire. She graduated from Waupun High School in 1944 and married the love of her life Glenn Pitzlin on September 25, 1946. Her goal in life was to be a school teacher of which she never attained but instead found rewards in other occupations. She proudly referred to her sales associate of the year award at JC Penney in Beaver Dam allowing her to purchase their first TV with the bonus. She continued her employment at Day Implement in Horicon as office manager, then Frei Oil in Horicon as office manager and Hanefeld Bros Trucking in Burnett from which she finally retired. Following her retirement she spent time traveling with her husband and doing volunteer work at Dodge County Human Services and Bethesda Store and Fair. She was cheer leading coach at St Stephen’s Lutheran School and member of St Stephen’s Ladies guild.But nothing filled her and Glenn’s time more than their card club and polka dancing. So many of their closest and most cherished friends were polka dancing and card playing friends. For the friends she had the pleasure of meeting over the years she says THANK YOU! She was so waiting to get to Heaven so she could be with Glenn again and get back to dancing. Two days before her passing she was able to mouth the words to “Save the Last Dance for Me”. In her later life she lived for her brisk walks and her cherished weekly visits with her daughter Nancy and their trips to see familiar sites and to get her cheeseburger, fries and diet coke from McDonalds. She is survived by one daughter Nancy (Steve) Niebauer of Hartford: one son Mark (Jill) Pitzlin of Martinez, CA: one granddaughter Jessica (Joe) Rice of Pacheco, CA: two grandsons, Jason (Sara) Boeck of Iron Ridge and Joshua (Kelly) Pitzlin of Seattle, WA: three step granddaughters, Kim (Michael) Schmitt of West Bend, Kelly (Scott) Stueber of West Bend, and Kristin Niebauer of Beaver Dam: three great granddaughters, Paige and Madison Boeck of Iron Ridge, and Joelle Rice of Pacheco: three great grandsons, Landon Boeck of Iron Ridge, Jonathan Rice of Pacheco and Elliott Pitzlin of Seattle: nine step great grandchildren, Broderick and Sophie Slaugenhaup and Courtney and Emily Schmitt of West Bend, Hannah and McKenna Stuber of West Bend and Kaden, Colin and Jack Reabe of Beaver Dam: two sisters Gladys Wilkes of Ripon and Beverly Walker of Princeton and many other nieces, nephews, other relatives and friends.She is preceded in death by her parents, Lorenz and Leona Daehn, her husband Glenn, one sister Arliss Jahns and her husband Gerald, one brother Edwin Daehn and his wife Evie and two brothers-in-law, Warren Wilkes and Robert Walker.The family wishes to send special thanks to Matthews of Horicon, Serenity Villa of Slinger and Horizon Hospice for their loving kindness and caring hearts.Memorials may be made to St Stephen’s School and Church or the charity of one’s choice.