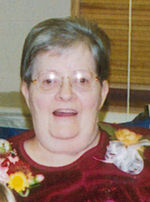 Marion L. Neuman, 79, a resident of Golden Living in Randolph, passed away peacefully on Thursday, April 17, 2014 surrounded by her family.

Marion was born the daughter of Walter and Lorena (Prellwitz) Flater on November 5, 1934 in Manawa in Waupaca County, Wisconsin. On March 28, 1953, she was married to Leonard Neuman in Iowa.
Marion was a 1952 graduate of Manawa High School, and moved to Beaver Dam that same year. She worked at Walker”s Restaurant in Beaver Dam for 24 years, and then worked at Orv”s Foods Store in Beaver Dam until she retired in 1992.

Marion was an avid baker, specializing in cookies and candies that she enjoyed sharing with the entire neighborhood. Marion and her best friend, Esther Martin, had an annual tradition of continuously baking from just before Thanksgiving right up until Christmas. She also made wedding cakes for family and friends. Marion loved to crochet, sew, and make crafts. She made tablecloths, afghans, baptismal gowns, draperies, and clothing. She also enjoyed going out and playing bingo.

She was preceded in death by her parents, her former husband Leonard, and h