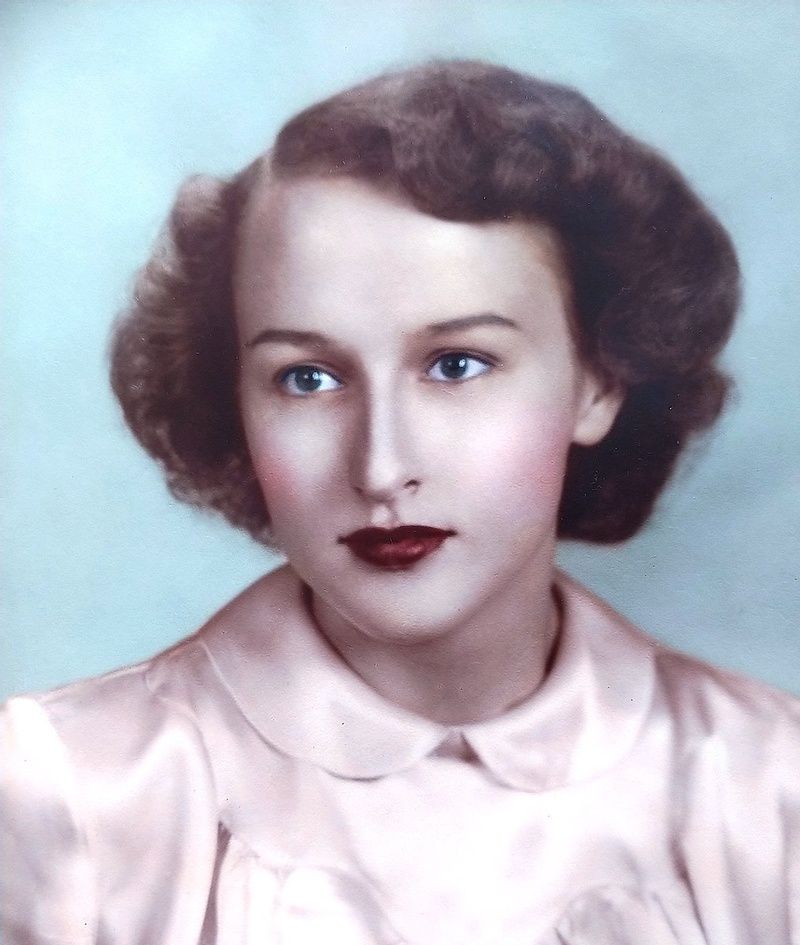 Marion Elvira (nee Coulter) Schuster of Hartford, WI passed away Monday, April 5, 2021 after a battle with cancer.A small family graveside service will be held at Union Cemetery in Theresa on Friday, April 9, 2021. A Celebration of Life for Marion will be held at a later date in the Fall of 2021. Marion was born on a farm in the town of Wayne to the late David and Alice (nee Wilke) Coulter on Sept. 25, 1933. She went to Mullen grade school and graduated from Kewaskum High School in 1951. After graduation, Marion was employed by Bill and Frances Krueger at the Empire Hotel in Theresa, WI. On Sept. 16, 1954, Marion was united in marriage to Kenneth Paul Schuster at Salem United Church of Christ in Wayne, WI. On November 1, 1954 they lived in and moved a house trailer to Ft. Pierce, Florida, spending the winter there. In the Spring of 1955, Ken and Marion moved back to Theresa. They moved several times and eventually moved to Mayville, where their 5 children grew up and went to school. From 1966 to 1974, Marion was employed at Maysteel Corp. as a machinist in the punch press dept. From 1974 until Ken passed away in 1993, Marion did the book work for “Ken Schuster Construction” in Mayville.Marion moved to Fond du Lac in 1994. In 2001 she moved to Laguna Woods California, in a condo her son Patrick purchased for her. She lived close to him and his family and was able to watch her 3 grandchildren grow up there. She made wonderful friends, Bev, Sally, Becky, and Anne and spent many fun game nights. She also made many friends in the area, and especially enjoyed her friendship with Dan and Gaye Ramella. She really enjoyed her daily phone conversations with her cousin Marlene in California, and kept in touch with family and friends by creating beautiful holiday/birthday cards on her computer and printer. She moved to Hartford in 2011, after her son Patrick, passed away in 2010 and lived in a senior living apartment. Marion leaves behind 4 children: Terence (Arlete) Schuster of Marietta, GA., Douglas (Laurie) Schuster of Fond du Lac, Scott Schuster of Mayville, Debbie Schuster of Lake Forest, CA., and Denise (Andrew) Roskopf of Hartford and special friend Cheryl. Other Survivors include grandchildren: Jessica (Ben) Logsdon, Logan (Chelsie) Schuster, Brittany (Tyler) Tomjanovich, Sarah (Jake Buchner) Schuster, Angela (Dan) Piel, Meghan (Jesse) Menges, Patrick II (Jodie) Schuster, Daniel (Lindsay) Schuster, Brian Schuster, Dylan (Shannon Eeg), Brendy (Jose Hernandez) Schuster, Ashley (Vincent) Vega, Brenton (Maggie) Roskopf and Matthew (Mallory Dejno) Roskopf. Great grandchildren: Ellie, Patrick III, Jack, Wyatt, Xzavier, Isaak, Cooper, Miles, Max, Viera, Hailey, Mason, Lennon, Boden, Theo, Silas, Arthur, Rachel Hernandez and Sharlet. One great great grandchild, Alexis Dallmann; also special friends from Australia “scrabble bubbies” Debbie and Heather.In addition to her husband, parents, and stepfather, Jerome Schiller, Marion was preceded in death by a son, Patrick Allen Schuster and her only sibling, David L. Coulter of Kewaskum, and her great granddaughter Ellie’s husband Brad Dallmann.We would like to thank Aurora Hospice, ComforCare, and Help at Home, for their assistance in mom’s care. We especially want to thank Phyllis and Angie, who were wonderful caregivers.The Koepsell Funeral Home in Mayville is serving the family. Online condolences may be made at www.koepsellfh.com.