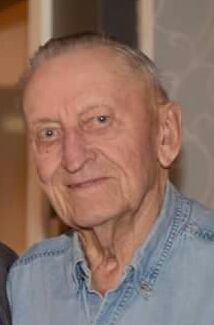 Merlin “Pete” Kiekhaefer, 88 years old, of Horicon, passed away on Thursday, January 7, 2016 at Matthew’s of Horicon.Funeral services will be held on Wednesday, January 13th at 11:00 a.m. at Zion Lutheran Church in Horicon, with the Rev. Mark Hasty officiating. A visitation will be held on Tuesday, January 12th from 4:00 – 6:00 p.m. at Koepsell –Murray Funeral Home in Horicon, and also on Wednesday, January 13th from 10:00 a.m. until the 11:00 a.m. service at church. Burial will take place at Oakhill Cemetery in Horicon.Merlin was born to Berthold and Verna (Schoeffel) Kiekhaefer on October 26, 1927 in Theresa. In 1932 the family moved to the Kiekhaefer estate farm on Hwy 33 in the township of Oak Grove. Pete attended Warden Public School for eight years. At age 13 he quit school and worked as a hired hand on the 160 acre family farm. At age 22 he started working at John Deere Van Brunt and was there until retiring in 1985. Following retirement, Pete worked as a tour guide for John Deere for 17 years. He worked a total of 52 years at John Deere. Pete was united in marriage to Evelyn Schindel on April 11, 1947. He later married Florine Freeman on April 27, 1963. Pete was a member of Zion Lutheran Church of Horicon. He served on the church council, as an usher, and he loved decorating the church Christmas tree. Pete was a member of the Rat Club and he was a volunteer at the Clearview Holiday meals. He enjoyed watching the Brewers and Packers. Pete always had a smile on his face. He loved spending time with his family and grandchildren.Pete is survived by his children- William (Penny) Kiekhaefer of Horicon, Terrance (Michelle) Kiekhaefer of West Bend, Jeff (Jennie) Kohman of Beaver Dam, Mary (John) Hughes of Beaver Dam, and John Kiekhaefer of Horicon; his sister- Carol Jean (special friend Richie) McDowell of Juneau; his brother- Frank (Corinne) Kiekhaefer of Beaver Dam; his grandchildren- Shannon, Billye, Jennifer, Lori, Donna, Travis, Grant, Lauren, April, Amy, Arik, Tim, Amanda, Christopher, and Sean; his 14 great grandchildren; nieces, nephews, other relatives and friends.Pete is preceded in death by his parents, his wife Florine, 2 sons- Robert “Mayor Bob” and Charlie, his sisters- Shirley and Adeline.For the last 22 years Pete was a regular at the Rock River Tap in Horicon where he will be sadly missed by his friends. He was truly one of a kind.Memorials may be made to Zion Lutheran Church of Horicon.The family would like to give a special thanks to the staff of Matthew’s of Horicon Senior Living, Chaplain James Mallman, and Generations Home Care and Hospice.