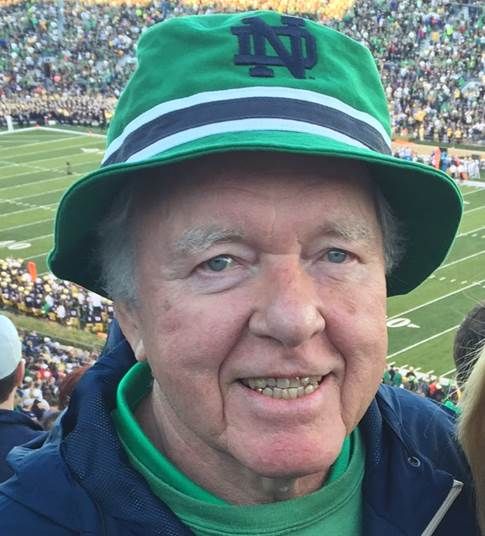 Michael Jerome O’Neill, age 83, of Mayville, formerly of St. Paul, Minnesota, passed away peacefully in his home on August 18, 2018.A memorial Mass of Christian Burial will take place on Thursday, August 30 at 1 p.m. at St. Mary Catholic Church with the Rev. Fr. Tom Biersack presiding. Visitation will take place on August 30 from 11 a.m. until the time of Mass at 1 p.m. at the church. Military honors will be conducted by the Mayville American Legion Post #69.Michael was born the son of Raymond and Grace (Moriarty) O’Neill on June 21, 1935 in St. Paul, Minnesota. He attended St. Columba grade school, Cretin Military Academy, and the University of Minnesota, where he graduated in 1958 with a B.S. in Mechanical Engineering. He was a veteran of the U.S. Army, serving in the Ordinance Corps between the years of 1958-60. During his tenure in the Army, he acted as lead engineer for the design and development of the M109 self-propelled howitzer, an artillery unit that would go on to be used in combat in the Vietnam, Gulf, and Iraq Wars. Following his tenure with the Army, he was hired on at General Motors in Ohio as a project engineer. He spent his first two years at GM on assignment in Germany & Lebanon, and traveled extensively throughout Europe and the Middle East. After five years with GM, he was recruited to work for John Deere, prompting a relocation to Dubuque, Iowa in 1967. On March 18,1970, he met his wife Mary Jane at a post-St. Patrick’s Day celebration in Dubuque. Michael and Mary Jane were united in marriage on December 26, 1970, at Nativity BVM in Menominee, Illinois. Soon after, their first son Brian arrived, followed by their second son Darren one year later. The family then moved to Davenport, Iowa, with Michael taking a new position at John Deere. Here they welcomed daughter Megan and son Kevin. In 1978, Michael transferred with John Deere for the last time to the Horicon Works location in Wisconsin. The O’Neill’s settled in Mayville, Wisconsin, where they have resided since. During Michael’s career at John Deere, he led the design & commercialization of the skid steer and commercial front mower. He secured ten engineering patents for his design work along the way and was also an active member in the Society of Automotive Engineers. Michael was very involved in the Mayville community, serving as President of both the Mayville High School Board of Education and the Police & Fire Commission. He also served on the Wisconsin State Bar Board of Administrative Oversight Committee for six years. He was a dedicated member of St. Mary’s Parish community, leading the establishment of the parish Knights of Columbus in 1984. Michael is survived by his wife Mary Jane of Mayville, his four children, Brian (Colleen) O’Neill of Garden City, NY; Darren (Shadie Majidi) O’Neill of River Hills, WI; Megan (David) O’Neill Daily of Shorewood, WI; and Kevin (Leigh Ann) O’Neill of Carmel, IN; and his twelve grandchildren Kelly, Kevin, Jack, Mairin, Finn, Colin, Dylon, Ryan, Connor, Leyla, Cadyn, and Lauren. Michael is survived further by his sisters Mary Jo Doyle, Therese (Maynard) Oster, Corrine (Norm) Geiger, and Kathleen Geisen. In heaven he joins his parents, Raymond and Grace O’Neill, brothers Patrick and wife Donna O’Neill, brother Terence and wife Geraldine O’Neill, sister Grace Ann and husband Ted Hovet, and brothers-in-law Joe Doyle and Richard Geisen.In lieu of flowers, donations to St. Vincent de Paul and the Knights of Columbus are greatly appreciated.