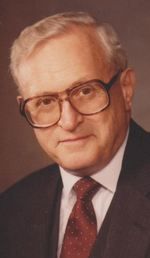 Mick attended St. Thomas Military Academy in St. Paul MN, and later studied at UW-Madison earning Masters in Engineering and Doctorate of Law degrees. He served in the U.S. Navy at the Naval Research Lab from 1944-1946. He began his distinguished career at Beaver Dam”s Monarch Range Company in 1949 developing gas and electric ranges, wood heaters and furnaces. Many of the company”s patents were his. He was promoted to V.P. of Engineering in 1974 and served as the company”s President from 1976 to 1985. He joined the law firm of Habush, Habush & Davis in 1986 where he worked until his retirement in 1990.

Mick was a devoted husband, father and community leader serving on numerous local, regional and national boards. He was a member of Beaver Dam”s Knights of Columbus and American Legion. He assisted St. Peter”s Boy Scout Troop 24 and served on the board of the Badger Council. He helped start the community”s Boys Baseball program, coaching both Little League and Babe Ruth teams. He was a board member of the 1st National Bank and Beaver Dam Community Hospital at the time of its merger. Mick served as President of Beaver Dam”s Chamber of Commerce and United Fund. He was a long-time member of and later chaired Wayland Academy”s Board of Trustees.

In 1975, Mick was honored by the University of Wisconsin, receiving their Distinguished Service Citation “as an engineer, executive and community leader whose engineering and administrative leadership contributed significantly to the improvement of product design and production methods, and to the growth of his community.” In 1980 he was elected National Chair of The Wood Energy Institute, and was voted “Man of the Year” by the International Solid Fuel Association.

Mick was a voracious reader and avid sportsman. He loved golf and had been a member of Old Hickory since his teens. He was well known among his peers for generating remarkable power with his short backswing, his 2 holes-in-one and his motley collection of golf clubs. He loved all aspects of both power and sail boating, ultimately serving as Commander of the Coast Guard Auxillary and Commodore of the Pioneer Yacht Club. He was a huge Packer and Brewer fan and a Badger football ticket holder for 63 years.

Services and visitation will be held at St. Katherine Drexel Church on Tuesday, December 27th. Visitation with the family will be from 9:30 until the funeral mass at 11 a.m., followed by a luncheon for guests and family at Old Hickory. Internment for the family to follow at the cemetery. Well wishers are asked to direct their donations to Hospice Care or the St. Katherine Drexel School Fund.