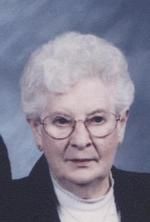 Norma Mae Schultz, age 94, of Horicon, and formerly of Fox Lake, died on Tuesday, September 24, 2013 at Matthews of Horicon.

The visitation for Norma will be at St. Stephen Lutheran Church in Horicon on Friday, September 27, 2013 from 11:00 AM until 11:50 AM. The funeral service will follow at the church on Friday at 12:00 Noon with Rev. Daniel Seehafer officiating. Burial will be at Riverside Cemetery in Fox Lake on Friday at 2:30 PM.

If desired, memorials may be made in Norma”s name to St. Stephen Lutheran Church, 505 Palmatory Street, Horicon, WI 53032.