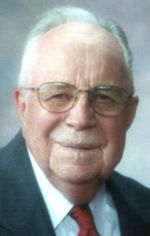 Services will be held on Thursday, December 23, 2010 at 11 AM at the Murray Funeral Home, Beaver Dam. Visitation will be held from 10 AM until the time of service, at the funeral home. Rev. Dr. Mark J. Molldrem will officiate. Burial will take place at the North Burnett Cemetery.

Orin Schroeder was born on October 22, 1916 in the Town of Burnett, the son of Carl & Meta (Hanefeld) Schroeder. He married Velma Birkholz on September 7, 1940 at First Ev. Lutheran Church Beaver Dam. He had worked at Monarch Range for over 40 years, retiring in 1975. Orin was a member of First Ev. Lutheran Church, Beaver Dam, and had lived in Burnett Corners until moving to Beaver Dam in 1999. He loved to play cards as well as dance Polkas.

He is survived by his wife Velma, of Beaver Dam, a son Randy (Susan Jarapko), of Fox Lake, a daughter Rita (Jim) Gillmore, of Rochester, MN; also surviving are eight grandchildren and 17 great-grandchildren, and a sister, Iva (Leslie) Schwoch, Burnett Corners, nieces, nephews, other relatives and friends.

He was preceded in death by his parents, a son Ryan Schroeder in 1982, and a brother Alois Schroeder.

The Murray Funeral Home, 131 E. Maple Avenue in Beaver Dam is caring for the family. To leave condolences, for directions, or other information, please visit our website at www.MurrayFH.com.