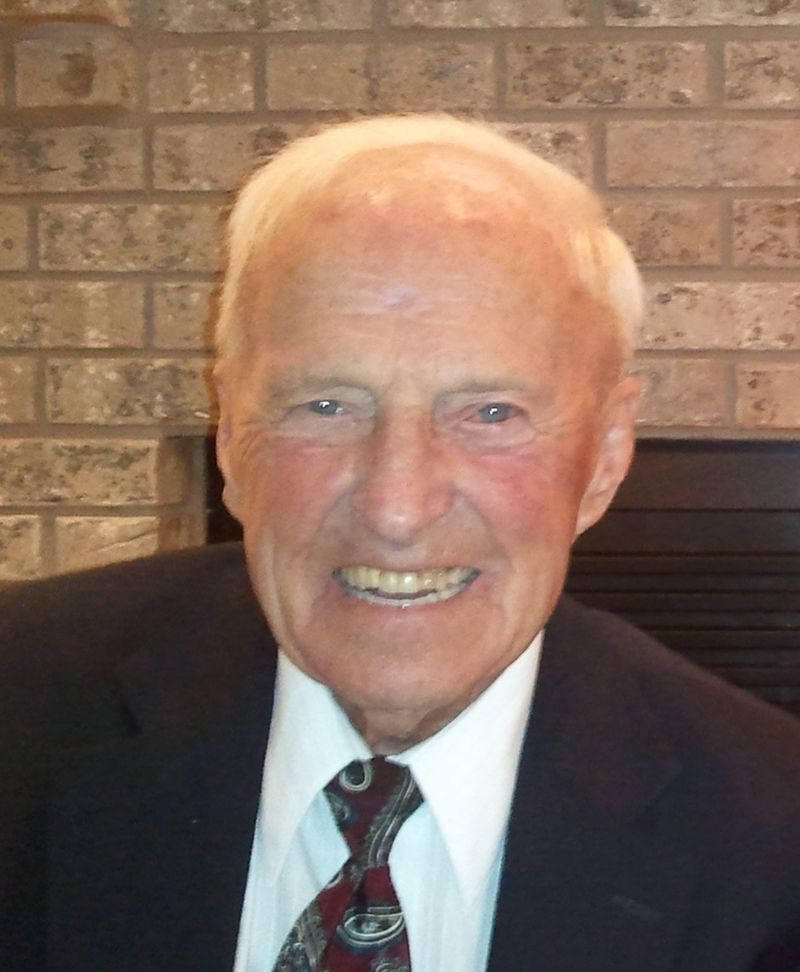 Richard Allen “Dick” Hunt, 87, of Fall River and formerly of Horicon, WI ended a well-lived life on Thursday, October 23, 2014 at Hillside Manor, Beaver Dam, following a brave battle with complications from diabetes. His family was by his side. Visitation for Dick will be at St. Stephen Ev. Lutheran Church in Horicon on Tuesday, October 28, 3014 from 9:30 AM to 10:50 AM. Funeral services will follow at church on Tuesday at 11:00 AM with Pastors Daniel Seehafer and Jonathan Szczesny officiating. Burial will follow at Oak Hill Cemetery in Horicon with military honors.Dick, who often said his life’s motto was “let me live in a house by the side of the road and be a friend to man,” was known for his never-ending smile, positive good humor, strong Christian faith, and willingness to help others.Dick was born December 23, 1926 in Edgerton to Roy and Clara Hunt. He grew up in the Madison area, and was the 1936 and 1939 Dane County Marble Champion. He graduated from Madison East High School and then served in the U.S. Navy during WWII. Upon his return, Dick attended UW-Madison where he earned his undergraduate and master’s degree in wildlife management. Following graduation, Dick began his 36-year career as a waterfowl research biologist with the WI Department of Natural Resources at Horicon Marsh. He married the love of his life Janis Krueger on September 12, 1953. They raised four children and made their home in Horicon for more than 50 years. Dick was a member of St. Stephen’s Lutheran Church for 61 years, where he was a Deacon, helped in the early planning stages of the current church, and volunteered at the food pantry. Dick was highly respected by his colleagues for his far-sighted, straight-forward and rigorous approach to preserving Wisconsin’s natural resources. Considered one of North America’s top waterfowl researchers, he contributed to protecting, promoting and managing Wisconsin’s migratory birds and their wetland habitat for more than 60 years. His work led to the development of one of the finest state wetland and waterfowl conservation programs in the country. Dick received many honors during his career, including The Wildlife Society’s Wisconsin Award and the Mississippi Flyway Council Conservation Award. In 2012 he was humbled to be inducted into the Wisconsin Conservation Hall of Fame. Dick often marveled at how lucky he was to have a job he loved.Dick was an avid outdoorsman, renowned for his skilled aim and knowledge of everything that swam, flew, crawled, walked or ran. He especially enjoyed the many years of hunting and fishing with his brother Bob. In retirement, Dick was active in many conservation groups and loved traveling the backroads of the state with Janis, always on the lookout for wildlife and a spot for a picnic lunch. He was a dedicated walker, voracious reader, and engaging conversationalist. Survivors include his wife of 61 years, Janis; daughters, Rebecca Hunt (Jim Koch) of Middleton, Christine (Dan) O’Connell of Bristol and Amy Hunt of Madison; three grandsons, Rob Snyder, and Brice and Zachary O’Connell; his sister Marian; sister-in-law Phyllis Hunt, nieces Lori and Cyndy, nephew David; his sister-in-law Lois (Jim) Asmus, niece Dawn and nephews Greg and Mike; and brother-in-law Don (Betty) Olson and niece Nancy.Dick was preceded in death by son Kim, sister Dorothy, brother Bob and his parents.Special thanks to all the caregivers at Hillside Manor who so compassionately cared for Dick and supported our family for the past five months.He was a loving husband, father, and grandfather who will be greatly missed by his family and remembered fondly by friends and colleagues.The family prefers memorials to St. Stephens or a conservation organization of your choice.The Koepsell-Murray Funeral Home in Horicon is caring for the family. To leave online condolences, or for directions and other information, please visit our website at www.KoepsellFH.com.