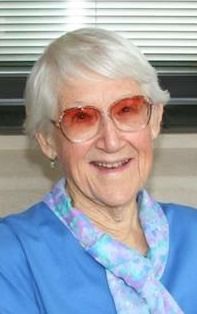 Roberta M. Hunt, 93, of Lake Mills and formerly of Waterloo passed away on Wednesday, October 14, 2015 at Rainbow Hospice in Johnson Creek.Roberta May was born the daughter of Norman O. and Lulu Belle (Spencer) Roth on March 29, 1922 in Hillsboro, WI. She was a 1939 graduate of Baraboo High School and later earned her bachelor’s degree in Home Economics with a minor in Chemistry in 1943 from UW-Madison. She was married to Ervin R. Hunt on January 16, 1945 in Houghton, MI. She held her first position as a Home Economics teacher with the Ondossagon School in Ashland and later with the Lake Mills School District. She was later employed in the revenue office of the IRS in Austin, TX until retirement. After retirement, she published many articles for Country Today Newspaper. Roberta’s focus was on her family and their wellbeing; she was always there for them.Roberta is survived by her children: Norman (Mary) Hunt of Waterloo, Russell (Wendy) Hunt of Baraboo, Thomas (Heather) Hunt of Wisconsin Dells, and David (Kim) Hunt of Lake Mills; 10 grandchildren: Sara (Tony) Mallegni, Ryan Hunt, Gwen Carlson, Margaret (Larry) Sphorleder, Martin (Keri) Hunt, Barry (Catie) Hunt, Jerry (Amanda) Hunt, Erica Hunt, Kevin (Danielle) Hunt, and Haley Hunt; 9 great-grandchildren; and further survived by nieces, nephews, other relatives and friends.She was preceded in death by her parents, her husband, Ervin in 2002, her daughter, Marilynn Hunt, and her siblings: EvaBelle Kensmoe, Dorothy Hill, Robert Roth and Lawrence Roth.A memorial service will be held at 11 a.m. on Saturday, October 24, 2015 at the Koepsell-Zeidler Funeral Home in Columbus. A memorial gathering will also be held at the funeral home from 10 a.m. until the time of the service. Inurnment will take place at Hampden Cemetery, township of Hampden, WI.In lieu of flowers, memorials may be directed to PACT of Madison which provides innovative treatment for severely disturbed adults and adolescents, particularly persons with schizophrenia.