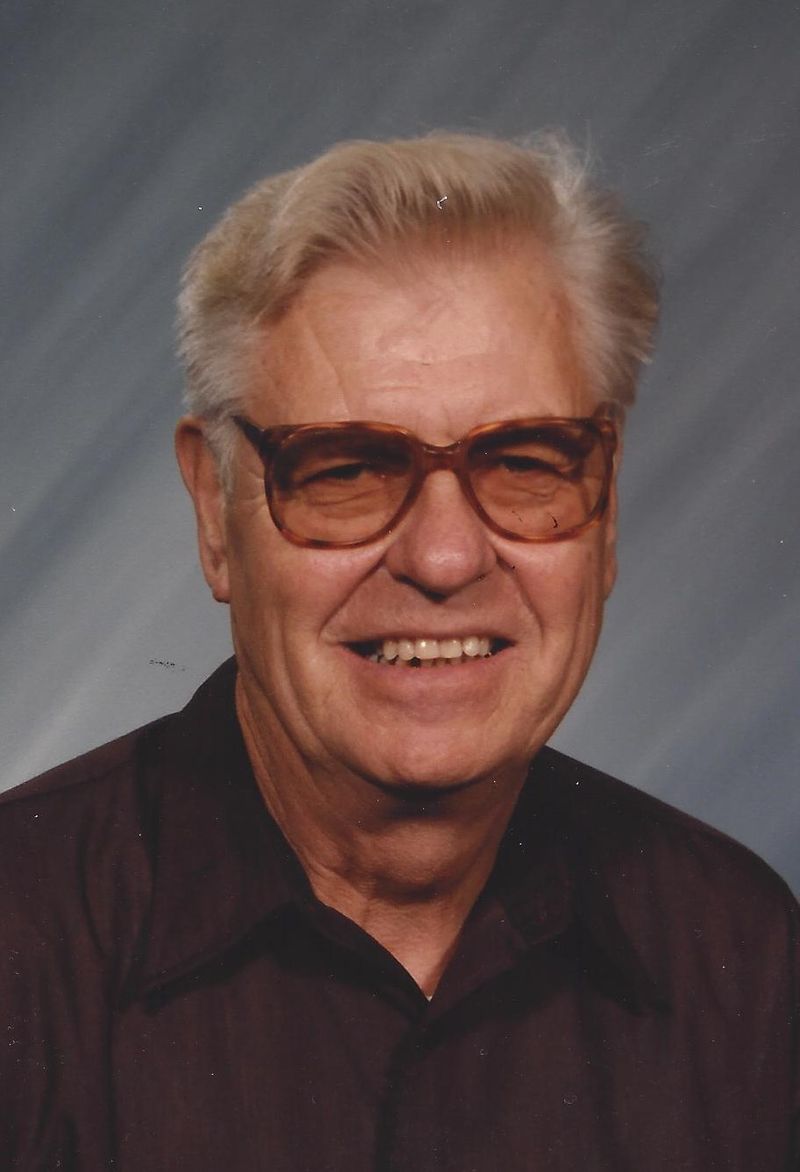 Ruben R. Schaumberg, 87 years, of Mayville, WI was called home to his Heavenly Father on Thursday, December 18, 2014 in Grafton, WI. A memorial service will be held on Saturday, December 27 at 2:00 p.m. at St. John Ev. Lutheran Church, Mayville, with the Rev. Sean Willman officiating. A visitation will be held on Saturday, December 27 from 11:00 a.m. – 2:00 p.m. at the church. Ruben was born on August 11, 1927 in Lomira, WI, to John & Martha (Behm) Schaumberg. He was a 1945 graduate of Mayville High School. Ruben was first united in marriage to Dolores Bintzler on January 25, 1947. Following her passing, he was united in marriage to Helen Nelson on April 8, 1967 at St. John Ev. Lutheran Church in Mayville. He farmed the family homestead in the township of Lomira prior to moving to Mayville. He then worked at Maysteel Corp. as a foreman for over 30 years. After retirement Ruben and his wife, Helen served as custodians at St. John’s Lutheran School.Ruben was an active member of St. John Ev. Lutheran Church serving as an elder, usher, and also served on the board of Trustees. He was a past member of the Rock River Snowmobile Club in Mayville where he served as past president, treasurer, and also was on the board of directors. Ruben taught snowmobile education for over 20 years. He was a lifetime member of Field & Stream Sportsman’s Club where he held various offices and was also on the board of directors. He was a past president of the AAL Chapter 992 for many years. In his spare time, Ruben was an avid outdoorsman who enjoyed fishing and hunting. He also loved sports be it the Brewers or Packers.He is survived by his wife Helen of Mayville. His children- Larry (Connie) Schaumberg of Theresa, Lynn (Mike) Hayes of Oakfield, Luann (Joe) Kohlmann of Mayville, Lisa (Barry) Boline of Jackson, John (Special friend Jenny Meyer) Schaumberg of Mayville. His grandchildren- Eric (Jenny) Schaumberg, Jeremy (Niki) Schaumberg, Tim (Bridget) Schaumberg, Jessica (Scott) Buteyn, Joel (Dawn) Hayes, Abby (Ron) Woods, Sadie (Mark) Follendorf, Mitchell Boline, and Madeline Boline. His great grandchildren- Reed and Autumn Schaumberg, Allison and Hailey Schaumberg, Taylor and Hunter Schaumberg, Cassidy, Kylie and Karsyn Buteyn, Zoe and Max Hayes and Kaylee Follendorf; further survived by nieces & nephews, other relatives & friends.He was preceded in death by: his parents; his wife Dolores and his siblings- Arline Falk, Lucinda Zirbel, Marion Enderle, Elmira Weigand, Arnold Schaumberg, Reinhart Schaumberg (Infant), Sylvia Hundertmark, Reinhart Schaumberg, Clarence Schaumberg, Wilmer Schaumberg, and Allen Schaumberg.