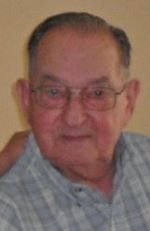 Stan was born on May 8, 1928 in rural Fox Lake, Wisconsin to the late Stencil and Mary (Gallager) Rechek. He enlisted in the United States Army and served from October 5, 1946 to September 6, 1949; after active duty, he continued to serve in the Army Reserves. On May 20, 1950, he was united in marriage with Shirley Neuman. Stan worked at several area businesses including Cleary Motors, Wisconsin Improvement Company, the Chrysler-Plymouth Dealership, and the Dodge County Highway Department. In 1969, Stan was called from the Army Reserves back to active duty in the United States Army. He worked as a Drill Sergeant, career counselor, and a recruiter in Massachusetts, Ohio, and Kentucky. He retired as a Master Sergeant on June 1, 1988. Stan served the City of Beaver Dam as an alderman in the 8th Ward for 9 years. He was a member of Annunciation Catholic Church in Fox Lake, the Knights of Columbus Pope John XXIII Council #1837, and the John E. Miller American Legion Post #146.