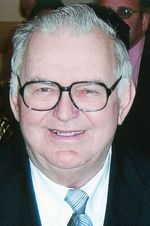 Visitation for Bill will be at the Murray Funeral Home in Horicon on Tuesday, April 19, 2011 from 5:00 PM to 7:00 PM and at church on Wednesday from 10:00 AM to 11:00 AM. Funeral services will be at Zion Lutheran Church, 317 E. Walnut Street in Horicon, on Wednesday, April 20, 2011 at 11:00 AM. Rev. Mark Hasty will officiate. Burial will be at Oakhill Cemetery in Horicon where the Horicon American Legion Post #157 will provide military honors. A luncheon will be served at the American Legion Hall in Horicon.

William Freeman Zuelsdorf was born on December 31, 1929 in Horicon, Wisconsin to the late William F. and Martha (Freeman) Zuelsdorf, Jr. He graduated from Horicon High School in 1947 and served in the United States Air Force from 1948 to 1952. He was stationed in Germany and assisted in the Berlin Airlift. On October 6, 1956, he was united in marriage with Mary Jane Polfuss in Juneau. He worked for the Milwaukee Road for 39 years, retiring in 1987. Throughout his life, Bill enjoyed fishing. He was a member of Zion Lutheran Church in Horicon since 1952 and was active in the Choir, Men”s Club and Sunday School. He was also a member of the Horicon American Legion Post #157, the 40/8 Dodge County Voiture Locale #856. As a member of the American Legion, he served as Post Commander and State Chaplain, as well as various other county and district offices.

The Murray Funeral Home, 716 Clinton Street in Horicon, is caring for the family. To leave online condolences, for directions and other information, please visit our website at www.MurrayFH.com.