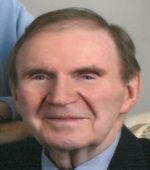 William F. Wendorf passed away peacefully at the William S. Middleton Memorial Veterans Hospital in Madison, Wisconsin on November 10, 2013 following a stroke complicated by a lifelong battle with multiple sclerosis. He was surrounded by his three loving children Michael, Elizabeth, and Robert.

Bill was born on September 10, 1928 in Oconto, Wisconsin to Helen Ford Wendorf and Lawrence “Coppy” Wendorf. He graduated from Wausau High School in 1947 and he was a 1951 Graduate of Lawrence University with a B.S. in Biochemistry. He was an officer in the United States Air Force from 1951 to 1955. He served in the Korean Conflict from 1951-1955 as a navigator in the United States Air Force. He began his insurance career at Sentry Insurance in 1956. He worked for Sentry Insurance from 1956 until his retirement in 1985. He had a successful career in insurance sales earning many awards of distinction and Top Performer awards throughout his tenure.

He was united in marriage on March 16, 1953 while in the service, to Mary Jo Cassidy in Wausau, Wisconsin. They enjoyed 57 years of marriage until Mary Jo”s death in 2010. Bill was an avid bridge player, golfer, and enjoyed fishing and hunting with his sons.

Bill was preceded in death by his devoted wife Mary Jo, and his mother and father. He is survived by his loving children Michael Wendorf (Virginia McDowell) of St. Louis, Missouri; Elizabeth Thompson (Curtis) and Robert (Lisa) Wendorf, both of Plover, Wisconsin; six grandchildren, Erin Wendorf; Jessica, Joe, and Lauren Thompson; and Kristin and Scott Wendorf.

The family would like to thank the Beaver Dam Home Health nurses who took such great care of Bill. Nancy, Mary Lou, Elaine, Tina, Cindy, Kim, Tammy, Julie, Amy, Michelle, Helen, Diana, Angie and Maria provided Bill with years of exceptional care, quality of life and companionship. Also the family would like to thank Stan Hintz for his friendship and the help he offered Bill over the years. The family is forever grateful to these angels.

A small private family service will be held on November 29, 2013 with interment in the St. Patrick”s Cemetery in Beaver Dam. The family requests in lieu of flowers memorials be made to the Beaver Dam Hospital Auxiliary at 707 S. University Ave Beaver Dam, WI 53916 or the Juvenile Diabetes Research Foundation at 1800 Appleton Road Suite 2 Menasha, WI 54952.